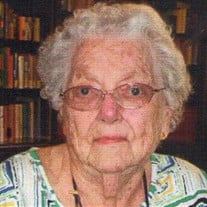 Mrs. Willie Frank Rogers, 97, died Thursday, November 29, 2018, at CMC-Pineville. A graveside service will be held at 3 p.m. Sunday, December 2, 2018, at Flint Hill Baptist Church Cemetery, with the Rev. Bruce Jones officiating. The family will receive friends following the service in the Fellowship Hall. Willie was born in Gibson, N.C., in 1921, the daughter of Frankie and Colon Stubbs. She attended Mars Hill College, graduated from Flora McDonald College and went on to pursue a career as a teacher. She taught elementary school for a total of 38 years in North and South Carolina and Virginia. After college, Willie married Robert (Bob) Rogers. Bob worked 15 years with the State Department of Agriculture when at the age of 40, he was called to the ministry. When talking to Willie about his calling - she supported him fully, never looking back. In fact, at one time, both of the children were in college and Bob was attending Wake Forest Seminary to get ordained. Throughout Bob’s career, he was called to several churches in several states. Willie taught school and committed to serving also as a pastor’s wife, fully involved with all aspects of her husband’s ministry. When Bob and Willie retired, they moved to Charlotte and became members of Flint Hill Baptist Church continuing to be actively involved in their home church. For pleasure, Willie and Bob traveled extensively around the United States and Canada creating warm memories for the both of them. She and Bob were married for 61-1/2 years at the time of his death (2005). Willie lived at Lake Wylie Assisted Living and more recently at Wellmore Assisted Living. She had numerous friends and enjoyed staying in touch via the telephone. Willie was blessed with two children, Martha (Randy), who lives in Charlotte and her son, George (Betsy), who lives in Aiken, S.C. She had two grandchildren, Lisa Rogers Davis and Matt Rogers; and a great-granddaughter, Jocelyn Davis. Memorials may be made to the Flint Hill Baptist Church Cemetery Endowment Fund, 269 Flint Hill Road, Fort Mill, SC 29715.

The family of Willie Frank Rogers created this Life Tributes page to make it easy to share your memories.

Send flowers to the Rogers family.