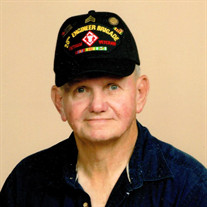 William Arthur “Bill” McCall, age 70, passed away Saturday, April 11, 2020, at his home. The funeral service will be at Noon, Thursday, April 16, 2020 at Unity Cemetery in Fort Mill, with Rev. Shannon Ford and Rev. Ken Terry officiating. Born in Rock Hill, Bill was a son of the late Edward Marshall McCall, Sr. and Arie Funderburk Taylor McCall. He was a lifelong member of the First Baptist Church of Fort Mill, having been dedicated to the church when he was just ten days old. Bill was a disabled veteran having served his country in the U.S. Army during the Vietnam War and continued his service in the Army Reserves for a total of 16 years. In the late 1970’s and early 1980’s He was as a firefighter with Riverview Volunteer Fire Department. Bill also was a Charter Member of Rolling Thunder S.C. Chapter #1. He was co-owner of McCall’s Construction. Surviving are four daughters, Alisa McCall Smith (Mitchell) of Heath Springs, Deana McCall Blackwell (David L., Jr.) of Indian Land, Kristie Taylor Victory (Woody) of York, and Della Chantée Adams (Justin) of Catawba; his brother, Edward McCall, Jr. of Fort Mill; and seven grandchildren, Trevor L. Taylor, Savanna L. Taylor, Hannah B. Blackwell, David H. Blackwell, Peyton L. Adams, Carson L. Adams, and Emma R. Victory. He is preceded in death by his grandson, Zachary S. Taylor in 1992. Due to health concerns, there will be no traditional hours of visitation with the family. Friends and family members wishing to view may do so between 1 p.m. and 4 p.m. on Wednesday at Wolfe Funeral Home. Memorials may be made to Rolling Thunder S.C. Chapter #1, P.O. Box 2615, Rock Hill, SC 29732; or to Crescent Hospice, 410 South Herlong Ave. Suite 102, Rock Hill, SC 29732.

The family of William Arthur "Bill" McCall created this Life Tributes page to make it easy to share your memories.

Send flowers to the McCall family.