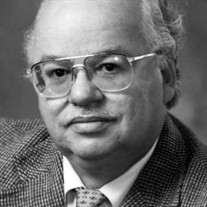 Mr. Walter Leroy Williams, Jr. 83, of Fort Mill, SC died on June 16, 2017 at Westminster Health & Rehabilitation Center in Rock Hill, South Carolina. A Celebration of Life in honor of Mr. Williams will be held on Saturday, June 24, 2017, at 4 p.m. The celebration will be held at St. Philip Neri Parish Center, 292 Munn Road East, Fort Mill, South Carolina, 29715. Walter was born on May 19, 1934 in High Point, North Carolina to Walter Leroy Williams Sr., and Mattie Portee Williams. Walter attended William Penn High School where he competed on the Tiger Sharks swim team, and was the 100 meter freestyle champion in 1951. During high school he served with the Civil Air Patrol and earned the Boy Scouts of America highest achievement of Eagle Scout. After graduating from William Penn in 1952, Walter entered A&T College of North Carolina in Greensboro, North Carolina. In 1954 he enlisted in the U.S. Air Force, and after basic training, attended advance airborne electronics school where he received specialized electronic communications and navigational skills. As an airborne radio repairman, Walter spent many hours working on both the Boeing RB-47E reconnaissance and KC-97 tanker aircraft. In September 1956, Walter married his home town sweetheart, Wanda Amaker and returned to A&T College of North Carolina to finish his college education. He earned his Bachelor of Science degree in Electrical Engineering in 1961 and was hired by the Boeing Company in Seattle, Washington. While at Boeing he performed electronic communication system design and development for the Dyna-Soar and Lunar Orbiter space vehicles. Additionally, he designed communication systems for commercial aircraft, including the supersonic transport. In 1973, he earned his Juris Doctor degree from the University of Washington School of Law. Walter litigated cases before the Supreme Court of Washington, the U.S. District Court for Western Washington, the U.S. Court of Claims, the U.S. Court of Appeals for the Ninth Circuit, and the U.S. Court of Appeals for the District of Columbia. He began his legal career as an Assistant City Attorney prosecuting criminal cases before the King County Superior Court and the Seattle Municipal Courts. Walter later joined the City Light Department where he was eventually promoted to Chief Assistant City Attorney. He also served as a Pro Tem Judge in the Superior Court, King County and was a Washington State Bar Examiner. Walter retired after 26 years of dedicated service to the City of Seattle. After 42 years in Seattle, Walter returned to the Carolinas. Throughout his life, Walter enjoyed snow skiing, fishing, woodworking, aircraft modeling, and travel. He also served as an Assistant Scout Master for Troop 7 in Seattle and recruiter for the University of Washington Huskies football team. He won numerous trophies as a competitive archer with the Boeing Archery Club. Walter was an accomplished artist. His ink drawing of a turn of the century Skagit River hydroelectric water wheel was used by Seattle City Light for a promotional poster. Walter is survived by his wife of 60 years, Wanda Amaker Williams; his son, Keith Williams and his wife Anne Ulibarri of Lorton, Virginia; his daughters, Anita Galloway and her husband Kenneth of Fort Mill, South Carolina, and Regina Sportsman of North Chesterfield, Virginia; his brother, Charles Williams and his wife, Mabel of Little Rock, Arkansas; and his sister, JoAnne Yokely of Fayetteville, North Carolina; 10 grandchildren; and 18 great-grandchildren. In lieu of flowers, donations may be made to Westminster Health & Rehabilitation Center where his caregivers provided him superior care and compassion. The address is 831 McDow Drive, Rock Hill, SC, 29732.

The family of Walter Leroy Williams Jr. created this Life Tributes page to make it easy to share your memories.

Send flowers to the Williams family.