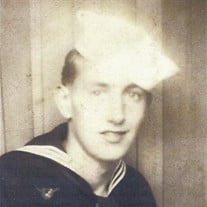 Theodore W. (Ted) Tryba, 92, of Fort Mill, SC, formerly of Ludlow Mass, passed away peacefully at Autumn Leaves Memory Care Community on May 19, 2019. Born to the late Joseph C. and Josephine M. (Peters) Tryba, he moved to the South in 1983, working for 30 years in the Carbide Cutting Tool Industry. Ted proudly served his country during WWII with the United States Navy, Naval Aircrew, flying in Catalina PBY’s, earning 4 medals, including the Asiatic Pacific Campaign Medal and the World War II Victory Medal. He was extremely honored to belong to “The Greatest Generation”. He was the beloved husband of 27 years to Margaret A. (Bates) until her passing in 1976. He is survived by his son Jeffery Tryba of Whately, Ma; and his devoted daughter, Lisa Jaworowski, and her husband Richard of Fort Mill, SC, with whom he lived; and his two cherished grandchildren, Courtney Margaret and Anthony (A.J.) Jaworowski; his adored goddaughter Mrs. Heather Bilotta, and many loving nieces and nephews, extended family members, and dear friends. He also leaves his ever loyal grand dog “Reggae”. Sadly, Ted was predeceased by his sister, Mrs. Elsa E. Ellison, and his younger brother, Joseph R. Tryba. Ted’s family would like to thank Hospice and Palliative Care Charlotte Region; all the staff at both Levine & Dickson Hospice House and Autumn Leaves for their exceptional care and compassion during his illness and journey home, your kindness will never be forgotten; and Marie Smith for her invaluable friendship. Funeral services and burial next to his dear Margaret, with military honors will be held privately by his family. Donotions in his memory may be made to Hospice and Palliative Care Charlotte Region, HPCCR.org. Thank you for your service, Dad.

The family of Mr. Theodore Walter Tryba created this Life Tributes page to make it easy to share your memories.

Send flowers to the Tryba family.