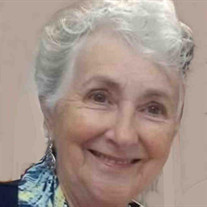 Shirley M Ward died unexpectedly but peacefully October 1, 2019 due to side effects of a medication. Shirley – known better as “Grandma” too many – was born in Burlington, Vermont on June 27, 1941 to the late Bernard and Catherine Basiliere. Shirley had been living at her son’s house in Fort Mill, SC since the passing of her husband; Carl Ward Sr. on August 12, 2017. Shirley and Carl were joined in marriage at St. Joseph’s Church in Burlington on July 9, 1960. Inseparable in marriage, now reunited once again for eternity. Shirley and Carl raised their family in Burlington. While raising their family, Shirley worked many years at JC Penney to provide all the many extras for her children. Mom’s number one enjoyment in life was shopping and her kids (and later grandchildren) which were very spoiled due to her shopping habits. Upon Dad’s retirement, Mom and Dad made Ormond Beach, FL their primary residence and returned to St. Albans, VT each summer to enjoy the company of many family members and friends. Shirley is survived by her two children; Carl Jr and his wife Sherry (Nash) of South Carolina and Theresa Ward of St Albans Vermont. She is also survived by her grandchildren and great-grandchildren that were a constant joy to her; Heather Ward and her daughter Kinsley of Rock Hill, SC, Corey Robert and his daughter, Peyton of St Albans, VT, Chelsea Hinson and her husband Justin and their children; Kayden, Ashton and Khloe of Indian Land, SC. Shirley leaves behind sisters; Joyce Bleau, Barbara Bushway, Mary Moore, Sue Sterling, Elaine Sorrell, and one brother Bernard Basiliere Jr. In addition, she is survived by her brother-in-law Leonard Ward, along with many nieces, nephews and cousins. Besides her husband, Shirley was predeceased by her granddaughters; Michelle and Nicole Robert. We want to extend great appreciation for the Tower 5 nursing staff at the Atrium Pineville hospital for outstanding support to “Grandma” during her brief stay. You made the entire family – and more importantly her – comfortable through the entire situation. Special thanks go out to Dr. Jana Hewitt whose professional and caring approach allowed us to understand and prepare. Services are being performed by Wolfe Funeral Home in Fort Mill, SC. Visiting hours will be 6 PM – 8 PM on Friday, October 4th. A mass of Christian celebration will be held at St Philip Neri in Fort Mill on Saturday, October 5th at 10 AM. There will be no burial at this time. A celebration of remembrance mass will be held at Holy Angels Church in St. Albans, VT on October 19th at 11 AM.

The family of Shirley Marie Ward created this Life Tributes page to make it easy to share your memories.

Send flowers to the Ward family.