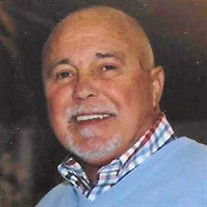 Mr. Ronald Gary Frasier, 74, died Friday, December 15, 2017, at CMC-Pineville. The memorial service will be at 1 p.m. Monday, December 18, 2017, at Carolinas Cornerstone Church, with the Rev. Barry Yates officiating. The family will receive friends following the service. Born in Lancaster, Ron was the son of the late Fred F. Frasier and Willie Carter Frasier. He was a 1962 graduate of Rock Hill High School and served in the S. C. National Guard for six years. Ron was a retired loan officer with Founders Federal Credit Union and had also served as a S.C. State Constable. Ron was a member of Carolinas Cornerstone Church, and the Catawba Masonic Lodge No. 56, and also the Omar Shrine. He enjoyed breakfast with his retired buddies, working in the yard and woodworking; but his greatest joy was spending time with his grandchildren. Surviving are his wife of 50 years, Terri Bennett Frasier; his children, Gary Lawrence Patterson (Paula) of Columbia, Jeffrey David Frasier of Greensboro, N.C. and Kristen Frasier Patterson (Jamie) of York; his sister, Frankie Frasier Pitmon of Rock Hill; and seven grandchildren, Brandi, Lexie, Adam, Priscilla, Carter, Emma, and Sarah Beth. Memorials may be made to the Shriners Hospitals for Children, 950 West Faris Rd, Greenville, SC 29605-4277.

The family of Ronald Gary Frasier created this Life Tributes page to make it easy to share your memories.

Send flowers to the Frasier family.