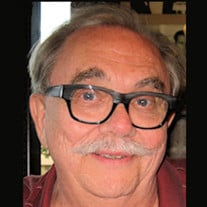 Mr. Robert William Topel Indian Land, S.C. Sun City Carolina Lakes — Robert (Bob) William Topel, 69, died suddenly Thursday, September 27, 2018 at his home. He leaves his wife of 32 years, Caroline (Close) Topel, his daughters, Leslie Topel of Lisle, IL, Melinda Topel of Kansas City, MO and Roberta Burgess of Casa Grande, AZ; many grandchildren and great grandchildren; and nephews Tommy Perry and Edward Perry. He was preceded in death by his sister, Bonnie (Topel) Perry and his parents, William Topel and Myrtle (Jerde) Topel. Bob was born in Waukegan, Illinois where he attended Waukegan High School. Bob started his aviation career at North Central Airlines in 1968 at O’Hare airport in Chicago, IL. He worked there until 1977 when he was promoted to Station Services Manager at Mitchell Field in Milwaukee, WI where they earned the Station of the Year award three times. After Milwaukee he became the Republic Airlines District Manager - Washington DC, responsible for Dulles International, Regan National and Baltimore airports. When Republic merged with Northwest Airlines in 1986 Bob moved back to Chicago but at Midway Airport this time. He managed that station until 1997 when he transferred to Charlotte NC. He left Northwest Airlines in 2002 and started working for the City of Charlotte at the airport. He was in the operations department, and retired in 2014 as the Landside Manager responsible for the parking lots, bus operations, taxi and limo services. During his career Bob worked on a lot of construction projects at the airports and would admire his work when he flew into those airports years later. Bob enjoyed his aviation career and was proud of what he accomplished during those years. Bob was interested in history and genealogy and after retiring he was working on tracing his ancestry. Bob & Caroline traveled to many cemeteries to locate ancestor’s graves, and visited county and state offices to view records for his family tree. Unfortunately he was not able to complete his “Book” before his death. Bob’s memorial service will be Saturday October 6, 2018 at the Lake House Ballroom in Sun City Carolina Lakes, 1353 Del Webb Boulevard, Fort Mill, SC 29707. Visitation will be from 2 p.m. to 3 p.m. followed by a short service starting at 3:15 p.m. In lieu of flowers, please donate to the American Heart Association via the internet at https://www2.heart.org/site/SPageNavigator/donatenow_heart_alt.html&s_src=comp_home or to AHA National Center, 7272 Greenville Ave.,Dallas, TX 75231 Arrangements made by Wolfe Funeral Home, Fort Mill, SC.

The family of Robert William Topel created this Life Tributes page to make it easy to share your memories.

Send flowers to the Topel family.