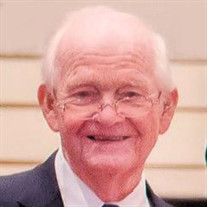 Rev. Ralph William Riley, age 89, went to be with the Lord on Thursday, November 4, 2021. He was surrounded by his family at the home of his daughter in Winston-Salem, NC. A Memorial Service is planned for Saturday, November 20, 2021 at First Baptist Church Fort Mill at 2:00 pm in the Chapel. The family has asked that masks be worn to attend the service. The church is located at 121 Monroe White Street, Fort Mill, SC 29715. Born in Lowell, NC, Ralph was a son of the late James Robert Riley and Mary Whitman Riley. During the summer of 1948, Ralph answered the call to Christian service at Ridgecrest during Youth week. He attended Mars Hill College, where he met Jessie Thompson, and they married in June of 1954. Ralph earned his Bachelor of Religious Education at the New Orleans Baptist Theology Seminary. On June 1, 1954, he began his ministry as Minister of Music & Education at First Baptist Church, Cuthbert, GA. Throughout his career, he also served at the following churches: East Belmont Baptist Church, Belmont, NC; Midwood Baptist Church, Charlotte, NC; Remount Baptist Church, Charleston, SC; Mount Vernon Baptist Church, Richmond, VA; and First Baptist Church Fort Mill, SC. He was the first full-time Minister of Music at Mount Vernon Baptist Church in Richmond, VA, where he was very involved in the 1970s directing the Youth and Youth Choirs. They traveled often to Eagle Eyrie and performed in multiple states during annual Choir Tours. At First Baptist Church Fort Mill, he served as the Associate Pastor, Minister of Education. He was a pioneer in the field of religious drama and was a founding member of the first dinner theatre in Fort Mill. He served there for 15 years before retiring in 1998. He was later called back to the church as the Pastoral Care Minister before retiring again in 2018 after 64 years and 7 months of church service. He is survived by his wife of 67 years, Jessie Thompson Riley; his sons, Michael Riley of Fort Mill, SC, Martin “Marty” Lee Riley (Johnna) of Richmond, VA; his daughter, Melody Riley Hartless of Winston-Salem, NC; nine grandchildren; and four great-grandchildren. He was preceded in death by his brother, Lee Franklin Riley, and his son-in-law Thomas Steven Hartless. Memorial contributions may be made to either the First Baptist Church Building Fund, 121 Monroe White Street, Fort Mill, SC 29715, or the Rev. Ralph Riley Memorial Fund to benefit Michael Riley Health Care at https://gofund.me/b8467a26. Condolences: www.wolfefuneralhome.com.

Rev. Ralph William Riley, age 89, went to be with the Lord on Thursday, November 4, 2021. He was surrounded by his family at the home of his daughter in Winston-Salem, NC. A Memorial Service is planned for Saturday, November 20, 2021 at First... View Obituary & Service Information

The family of Ralph Riley created this Life Tributes page to make it easy to share your memories.

Send flowers to the Riley family.