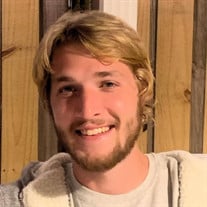 Parker Linden Bankson, age 27, passed away Monday, April 27, 2020, in Charlotte, NC. There will be a private funeral service held for family. Born in Rockford, IL, Parker was the son of Jack Walter Bankson and Katherine Mary Libby Bankson Clark. Parker graduated from Audrey Kell High School, where he played football. He enjoyed all sports, especially basketball and skateboarding, and was seldom seen without a basketball or a board in his hand. Parker was also a huge movie buff. Anyone who knew him knows he was famous for throwing at least one movie quote into every conversation. Through his timely quotes, his contagious laugh, and his knack for witty comebacks, he always kept those around him laughing. Parker had worked in residential heating and air, a job at which he excelled. His humor, his dedication, and his love for life are just some of the countless qualities that enthralled everyone he met. Parker is survived by his son, Logan Bankson, of the home; his mother and stepfather, Katherine and Bill Clark, of Fort Mill; his father and stepmother, Jack and Angela Bankson, and their son, John, all of New York, NY; and his stepbrother, Ben Clark, and stepsister, Olivia Clark, both of Charlotte, NC. He will be greatly missed by all of his friends and family. In lieu of flowers, please send donations to saintphilipneri.org Condolences: www.wolfefuneralhome.com.

The family of Parker Bankson created this Life Tributes page to make it easy to share your memories.

Send flowers to the Bankson family.