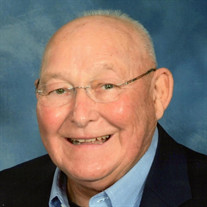 I have fought the good fight, I have finished the race, I have kept the faith. (2 Timothy 4:7) A Fort Mill native, born on May 12, 1941 to the late Murray B White, Sr. and Irene Wilson White finished the race on February 16, 2021. Husband, Father, Papa, servant, leader, and friend, devoted his life to his family, church, community, and nation. He married his high school sweetheart, Joyce Hipp in September of 1963. He was blessed with three children, Patrick Murray White (Jamie) and Susan Leigh Kidd (Daryl) of Fort Mill, Martha Grace Waters (Frank) of Spartanburg. He was Papa to Zachary White, Harper Ennis (Jake), Brice, Boyce, and Grace Waters, Alexander, Leah, and Ella Oppel, and Morgan and Luke Kidd. He also was adored by his golden retriever, Yoshi. Murray was a 1959 graduate of Fort Mill High School and was a proud alumna of Presbyterian College where he received his BA in 1963. He lived out his college motto- Dum Vivimus Servimus-While We Live, We Serve. He was a member of the William Plumer Jacobs Society and had the honor of receiving the Thomas Aurelius Stallworth award in 2019. Upon graduation, he received a commission in the US Army. As an Armor officer, he learned how to make quick decisions, and to look for windows of opportunity. After 2 years of active duty, Murray joined the South Carolina Army National Guard, and retired 30 years later as a Colonel. He received many awards and recognitions for his military service with the Legion of Merit being the highest. Murray was a loyal employee for the Springs Company throughout his entire professional career, where he was president of the Insurance Agency division. During his career, he not only helped people with their insurance needs, but also was a confidant and mentor to many. He balanced a career and family, while leading a life of service and giving. Murray held many positions in area civic organizations such as the Jaycees, Toastmasters, Chamber of Commerce, and was the secretary of the SC Association of Independent insurance agents. The Fort Mill Chamber of Commerce recognized Murray’s service by naming him the 1989 Citizen of the Year. The Chamber also presented Murray with their Lifetime Achievement Award for his many years of service to this organization in 2016. He was elected to the York County Council and served for fourteen years; four of them as chairman. He was passionate about his service to York County, and worked hard to bring accountability and trust to local government. Murray belonged to a family of educators and was well read and scholarly. Murray helped create the Foundation for Fort Mill Schools. The foundation has grown and continues to have an impact on the Fort Mill School system by providing scholarships for students and grants for teachers. Along with his family, he recently established the Irene Wilson White Future Teacher Scholarship with the Foundation for Fort Mill Schools. Murray loved where he lived and found much joy in nature and green spaces. However, he realized others wanted to live here for the same qualities he held so dear. He became a strong advocate for the conservation and preservation of the land. He was a founding member of the York County Forever Commission. Murray was the chair of the Catawba River Task Force, which developed a plan to protect the free-flowing section of the Catawba River in York, Chester, and Lancaster Counties. He received the first Murray B. White Preservationists of the Year award given by the Springs-Close Family, named in his honor. He won the Keepers of the Culture award in 2006. In 2007, Murray received the BMW award as South Carolina Conservationist of the Year. Murray was the founder of the Nation Ford Land Trust, which has now been in operation for 28 years and served as its chairman for 25 years. The NFLT has worked to protect almost 14,000 acres of land with most of it in York County. The land trust recently honored him by naming a 158 acre preserve after him. Murray loved the study of history and concentrated on topics involving the military and his family. He was a member and past president of the Sons of the American Revolution. He was proud to have traced his family’s lineage back almost five-hundred years to Clan Lamont in Scotland; whose motto was “Ne parcas nec spernas” Neither Despise, Nor Fear. His service to his church, Unity Presbyterian in Fort Mill was most important to him. He taught Sunday School, served as a deacon and elder, and chaired many committees. He was active in Providence Presbytery. He was a visionary for the future, inspiration to all that knew him, and a selfless servant. Along with his wife and children, he is survived by a sister, Anna White of Columbia, MO, and predeceased by a sister, Elizabeth Cribb, and an infant brother. A private service will be held at 4:00 PM on Saturday, February 20 followed by internment in the church’s columbarium. The service can be viewed via live stream at the following links: https://www.youtube.com/channel/UCwlDAwO7r_O7DgJVmbh4N7g https://www.facebook.com/UnityFortMill https://unityfortmill.org/about-us/live/ The family has requested that in lieu of flowers please consider a memorial for one of these organizations that Murray held so dear: Irene Wilson White Future Teacher Scholarship via Foundation for Fort Mill Schools Nation Ford Land Trust Presbyterian College Unity Presbyterian Church – Imagine The Possibilities Fund

I have fought the good fight, I have finished the race, I have kept the faith. (2 Timothy 4:7) A Fort Mill native, born on May 12, 1941 to the late Murray B White, Sr. and Irene Wilson White finished the race on February 16, 2021. Husband, Father,... View Obituary & Service Information

The family of Murray White Jr. created this Life Tributes page to make it easy to share your memories.

I have fought the good fight, I have finished the race, I have...

Send flowers to the White family.