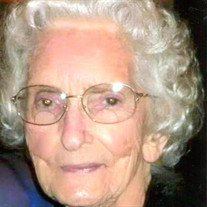 Mrs. Maude Belle Porter Furr, 97, went to be with Jesus on Saturday, July 1, 2017, at Hospice of Union County in Monroe, N.C. The family will receive friends from 6:30 until 8:30 p.m., Wednesday, July 5, 2017, at the Pineville Church of the Nazarene in the Sanctuary. The funeral will be at 2 p.m. Thursday, July 6, 2017, at the Pineville Church of the Nazarene, with the Rev. Dewey Wise and Rev. Carol Tate officiating. Burial will be at Unity Cemetery in Fort Mill, S.C. Born in Fort Mill, Mrs. Furr was the last surviving child born to the late Thomas Franklin Porter and Mamie Belle Wright Porter. She graduated Valedictorian from Pineville High School in 1937 where she was a member of the National Honor Society and the Beta Club. In 1939, she wed her husband, Ralph Albert Furr; they were married for 60 years until his passing in 1999. She was a homemaker and was a lifelong member of the Pineville Church of the Nazarene. Her church was a very important part of her life; she sang in the choir, was a member of the church ladies’ trio, and always played the role of Mary in the Christmas Pageant She was a member of the Church Board and active in the Senior Class Sunday School and the Joy Club. Surviving are her son, Ralph Eric “Rick” Furr (Mary Ruth) of Waxhaw, N.C.; four daughters, Linda F. Manus of Weddington, N.C., Terry Potts (Terry) of Indian Land, Carol Tate (Lawrence) of Waxhaw, N.C. and Sandy Parker (Danny) of Indian Land; 11 grandchildren; and 19 great-grandchildren. In addition to her husband, Mrs. Furr was preceded in death by her son-in-law, Tommy Manus; a grandson, Timmy Manus; four brothers, David, Tom, Marshal and James “Jake” Porter; and two sisters, Lois Furr and Myrtle Porter. The family would like to acknowledge her caregivers Debra Roberts and An Pham who had been angels to Mrs. Furr. They also want to acknowledge her neighbors, Rex and Kathy Edington and Darrel Long, who watched out for her for these many years since her husband’s passing. Memorials may be made to Life Giving Christian Center, 2338 Concord Hwy., Monroe, NC 28110.

The family of Maude Porter Furr created this Life Tributes page to make it easy to share your memories.

Mrs. Maude Belle Porter Furr, 97, went to be with Jesus on Saturday,...

Send flowers to the Furr family.