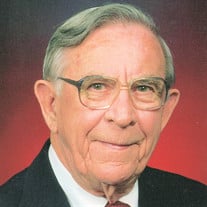 Mr. Lunsford Clifton "Sonny" McFadden, Sr., age 96, died Monday, June 25, 2018, at his home surrounded by friends and family. The family will receive friends from 1 until 2:45 p.m., on Thursday, June 28, 2018 at St. John’s United Methodist Church in the Fellowship Hall. The funeral will be at 3 p.m., with the Rev. Karen H. Radcliffe officiating. Burial will follow at Elmwood Cemetery in Fort Lawn. Born in Fort Lawn, Lunsford was the last surviving child born to the late Walter Bissell McFadden and Janie Clifton McFadden. During his childhood, his family moved to Fort Mill when his father went to work on local dam construction. Sonny was a 1939 graduate of Fort Mill High School and a 1943 graduate of Wofford College. During World War II, he served in the U.S. Army from 1943-1946 in the European Theatre. His entire working career was with Springs Industries, where he was a textile executive. A very civic minded person, Lunsford served on the Fort Mill Town Council and was Mayor from 1968 until 1977. He was a lifetime member of the Lions Club and received the foundation’s highest honor, the Melvin Jones Award; Lunsford also was a member of the Chamber of Commerce and was a member of the American Legion Post # 43. He was a member of St. John’s United Methodist Church for over 85 years. Surviving are two sons, Rick McFadden (Laura) of Bluffton and John McFadden of Irmo; two grandsons, Britt and Brian McFadden; and two great-grandchildren. He was preceded in death by his wife of 52 years, Katherine Ferrell McFadden (2003); his son, Lunsford C. “Sonny” McFadden, Jr. (2003); two brothers, Walter B. McFadden, Jr. and Walter R. McFadden; and two sisters, Ruth E. McFadden and Evelyn Yarborough. The family would like to express their gratitude to Susan Hill who was not only a caregiver but also a close friend. They would also like to thank Lunsford’s neighbors, Andrew DeRiso and Christina J. Hawks for their friendship and for checking on him daily. In lieu of flowers, memorials may be made to St. John’s U.M.C., P.O. Box 1298, Fort Mill, SC 29716.

The family of Lunsford "Sonny" McFadden created this Life Tributes page to make it easy to share your memories.

Send flowers to the McFadden family.