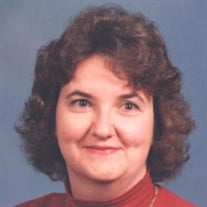 Mrs. Loisanna “Lois” Dickinson Edwards, age 69, ended her battle with ALS on Monday, April 13, 2020 at home with her husband by her side. Born in Denver, Colorado, Lois was the daughter of the late Reverend C. Harmon Dickinson and Ethel M. Davis Dickinson Clarke. She graduated with a mathematics degree from Winthrop University and went on to work for 27 years at Duke Energy as an IT programmer and analyst. Lois was an active member of Unity Presbyterian Church, where she served as a deacon and an elder. She also sang in the choir, played the handbells, and helped with the children’s choir. Lois took on many roles for Presbyterian Women and in 2016, she was awarded an Honorary Life Membership. She went on numerous mission trips to Honduras, building homes and enjoying the children. Lois volunteered for the Fort Mill Community Playhouse and the AARP Tax Service. She enjoyed going to Sunset Beach, crafting, gardening, and spending time with her family. She especially enjoyed watching her children and grandchildren performing in the Fort Mill High School Band. Lois will be greatly missed by her husband of 51 years, Robert Roy “Bob” Edwards; her daughters, Dawn Rackley, Christine Lake, and Jill Nordgren; her sons-in-law, Brian Rackley and Scott Nordgren; her brother, Al Dickinson and his wife Sherry of Schenectady, NY; her sister-in-law Sue, wife of the late Merv Dickinson of Somerset, NJ; her step-grandson Aaron; and her 9 grandchildren: Alex, Jack, Eric, Matthew, Sam, Abby, Sarah, Elise, and Seth. The family would like to give special thanks to Judy Terrell, Alberta Peoples, and the Hospice & Community Care team of Missie Wooten, Sarah Bassett, and Ramah Dixon for the attention and care they provided. Due to travel restrictions, a memorial service will be held at a later date. Memorials may be made to the Unity Presbyterian Church Music Program, www.unityfortmill.org, P.O. Box 1267, Fort Mill, SC 29716; or to ALS TDI, www.als.net, 300 Technology Square, Suite 400, Cambridge, MA 02139.

Mrs. Loisanna &#8220;Lois&#8221; Dickinson Edwards, age 69, ended her battle with ALS on Monday, April 13, 2020 at home with her husband by her side. Born in Denver, Colorado, Lois was the daughter of the late Reverend C. Harmon Dickinson and... View Obituary & Service Information

The family of Loisanna "Lois" Edwards created this Life Tributes page to make it easy to share your memories.

Send flowers to the Edwards family.