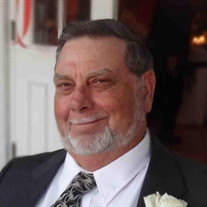 Mr. Lawrence Terry Potts, Sr. of Indian Land, entered into Glory Wednesday, September 25, 2019 at Piedmont Medical Center in Rock Hill. He was 75 years old. The funeral service will be at 1 p.m. on Tuesday, October 1, 2019 at the Pineville Church of the Nazarene, with the Revs. Aaron Horton, Dewey Wise and Duncan Puckett officiating. The burial will follow at Pleasant Hill United Methodist Church, 238 Fort Mill Highway in Indian Land. Mr. Potts was born in Rock Hill, son to the late Willie Andrew Potts and Jessie Belle Berry Potts. He and his sister were raised in the Pleasant Hill community in Indian Land. He graduated from Indian Land High School, spent four years in the U.S. Air Force and then started his own business, Terry's Heating and Air. Teresa “Terry” Starlene Furr was the love of his life and they married in 1964. He wanted to serve his community and was a firefighter with the Pleasant Valley Fire Department from 1969 to 1999, retiring as Assistant Chief. Terry was also an avid fisherman and hunter, earning the reputation of being "a grizzly bear with a Teddy bear's heart". He was a devoted member of the Pineville Church of the Nazarene for over 50 years. He is survived by his wife of 55 years, Teresa “Terry” Furr Potts; his son, Lawrence Terry Potts, Jr. and his wife Carla of Indian Land; his daughters, Angela “Angie” Potts Ennis and her husband Troy of Indian Land, and Marjorie "Margie" Potts Moore of Indian Land and her significant other Todd Wilson of Edgemoor; his sister, Edith Potts Jones and her husband Harry of Clover; and his six grandchildren, Greg Ennis, Zach Ennis (Kasey), Stone Potts, Cameron Moore, Jaxson Potts, and Kelsey Moore; his former son-in-law, Charles Moore, Jr. of Indian Land; and many nieces and nephews. In addition to his parents, Mr. Potts was preceded in death by his baby brother, Daniel. The family will receive friends from 6 until 8 p.m. on Monday, September 30, 2019 the Pineville Church of the Nazarene at 8614 Pineville-Matthews Road in Charlotte, N.C. and at other times at the family home. In honor of his loving wife, memorials may be made to the Alzheimer’s Association – S.C. Chapter, 3223 Sunset Blvd., West Columbia, SC 29169.

Mr. Lawrence Terry Potts, Sr. of Indian Land, entered into Glory Wednesday, September 25, 2019 at Piedmont Medical Center in Rock Hill. He was 75 years old. The funeral service will be at 1 p.m. on Tuesday, October 1, 2019 at the Pineville... View Obituary & Service Information

The family of Lawrence Terry Potts Sr created this Life Tributes page to make it easy to share your memories.

Send flowers to the Potts family.