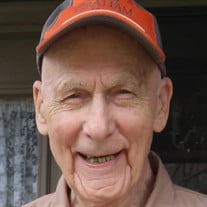 Kent Hubbard, 95, went to be with his Lord on Saturday, June 23, 2018, at Hospice and Community Care in Rock Hill, SC with family and loved ones by his side. Born in Endicott, NY on August 4, 1922 to Miles Roland Hubbard and Alice Lowry Hubbard, Kent was the younger of two children. He graduated from Carbondale High School, Carbondale, PA. Kent married Mary Booth in 1943 and they had three sons. In 1964 he married Thelma Dorman Hoover and legally adopted Thelma’s son Ted. Kent was employed by C & P Telephone Company as an installer of residential and business systems until retirement as a communications auditor in 1981. In June 1994 he was ordained at Halpine Baptist Church in Rockville, MD. Kent is preceded in death by his wife, Thelma; his parents; his brother, Miles; and two sons, Greg and Ted. He is survived by sons, Gary Hubbard of Burbank, CA and his wife Bette Ann, and David Hubbard of Fort Mill, SC; two grandchildren; three great-grandchildren; sister-in-law, Barbara Lentz and her husband Richard of Virginia Beach, VA; and nieces and nephews. Kent served in many ministry opportunities over the years, most recently volunteering in his home church, Manchester Creek Community Church in Rock Hill, SC where he served as an elder and in the worship team; and at the Billy Graham Library in Charlotte, NC. His more than ten years of service at the Library ended at the close of 2017 so he could care for his wife who was ill. Kent and Thelma were the oldest volunteers at the Library and were role models to many. In his earlier years he volunteered with Prison Fellowship in Maryland and the Carolinas and PTL Ministry in Fort Mill, SC. Over the years, Kent mentored and ministered to many individuals encouraging their walk with the Lord Jesus Christ. He so selflessly served others up until a couple weeks before his home going. A memorial service will be held at 11 a.m., Saturday, June 30, at Manchester Creek Community Church, 1689 Springsteen Road, Rock Hill 29730 with the family visitation following. Memorial donations may be made to Hospice & Community Care, P.O. Box 993, Rock Hill, SC 29731.

Kent Hubbard, 95, went to be with his Lord on Saturday, June 23, 2018, at Hospice and Community Care in Rock Hill, SC with family and loved ones by his side. Born in Endicott, NY on August 4, 1922 to Miles Roland Hubbard and Alice Lowry Hubbard,... View Obituary & Service Information

The family of Kent Lawrence Hubbard created this Life Tributes page to make it easy to share your memories.

Send flowers to the Hubbard family.