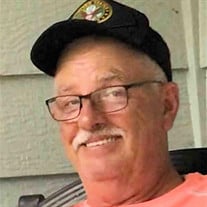 Mr. Kenneth Eugene Smith, age 62, passed away Saturday, September 14, 2019 at Atrium Main in Charlotte. The memorial service will be announced at a later date. Son of Donna Larae Weilacher Smith and the late Kenneth Otis Smith (2019), Ken was born in Warren, Pennsylvania. He served in the U.S. Army during Desert Storm / Desert Shield as a helicopter mechanic. He loved airplanes and worked with P.S.A. Airlines - American Airlines beginning in 2001. He was an outdoorsman and enjoyed hunting, fishing and camping with his family. Ken was known for his love of coffee. Surviving are his wife, Barbara Ellen Kornikoski Smith; three daughters, Nicole Smith of Piqua, Ohio, Erin Regan of Holly Springs, N.C. and Krystal Kinney (Dustin) of Jacksonville, N.C.; his mother, Donna Smith of Jamestown, N.Y. three sisters, Kandi Davis and Tammi Smith, both of Jamestown, N.Y., and Kimberly Smith of Warren, Penn.; and 6-1/2 grandchildren, Evan, Dylan, Dallas, Ryan, Briella, Jayden and Johnathan. In addition to his father, Ken was preceded in death by his brother, Richard Smith in 2017.

The family of Kenneth Eugene Smith created this Life Tributes page to make it easy to share your memories.

Send flowers to the Smith family.