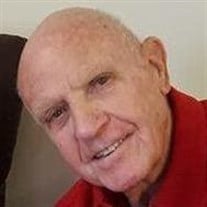 Kenneth Erwin Coke, age 82, passed away on Wednesday, January 9, 2019, at Atrium Health in Pineville, N.C. The family will receive friends from 10 until 10:45 in the Chapel Saturday, January 26, 2019 at First Baptist Church, 121 Monroe White Street in Fort Mill. The funeral ceremony will follow at 11 a.m. with the Rev. Jeff Bedwell and Rev. Johnny Caruso officiating. Burial will be at Unity Cemetery following the service. Born in Brazil, Indiana, Mr. Coke was the son of the late Carroll Cocke and Kenneth Sayle Cocke. He served and was a Veteran of the U.S. Air Force. Mr. Coke spent 40 years as a Structual Engineer and Stress Analyst for Boeing in Everett, Washington. He enjoyed trading in the New York Stock Exchange, working out at the Bellevue Athletic Club, the Kirkland Waterfront, dancing, and spending time with his grandchildren, whom he adored. He lived in the Seattle area of Washington State for most of his life. He moved to Fort Mill, S.C. in 2017 to be with his daughter, Carol-Lin and his grandson, Parker. Surviving are his daughter, Carol-Lin Rake of Fort Mill; his sister, Jane Roberson of Greenville, Mississippi; grandchildren, Molly Daniels, James Terhune, Carly Topp, Kenneth Terhune, Parker Dent, Stella Lacote, Louis Lacote; and great-grandchildren, Christian Daniels, Brooklynn Daniels, Mackynzie Daniels, Benjamin Daniels, Rylee Topp, Reece Topp, Jackson Topp, Mason Topp, and Caden Topp. He was preceded in death by his daughter Elizabeth Lacote in 2018. Memorials may be made to The Alzheimer’s Association, S.C. Chapter, 3223 Sunset Blvd., West Columbia, SC 29169.

Kenneth Erwin Coke, age 82, passed away on Wednesday, January 9, 2019, at Atrium Health in Pineville, N.C. The family will receive friends from 10 until 10:45 in the Chapel Saturday, January 26, 2019 at First Baptist... View Obituary & Service Information

The family of Kenneth Erwin Coke created this Life Tributes page to make it easy to share your memories.

Send flowers to the Coke family.