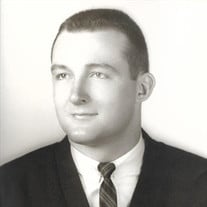 Mr. Kenneth G. Chalcraft, age 80, passed away peacefully in his sleep Thursday, March 7, 2019 at his residence, The Blake at Edgewater, in Indian Land, SC. He was born in Peoria, IL, January 3, 1939. Ken was the son of the late Harold G. Chalcraft and Sarah L. Chalcraft. He attended the University of Illinois and graduated from the University of Tennessee. He served as an officer in the U.S. Army in the U.S. and Korea and was in the Army Reserves. Ken began his career with Caterpillar, Inc in Peoria and eventually became a nationally known expert in computer control of inventory and parts management systems. At the time of his death he was still active as a consultant in his chosen field. Ken was an American History buff and traveled extensively throughout his life researching wagon train trails and military fortifications. He accumulated an extensive library of books, maps and stories surrounding the multitude of places he visited. One of his greatest pleasures was sharing his learning with others. High school and college sports also filled a large part of Ken's life. He leveraged his personal skills and achievements as a high school and college player in football, basketball and baseball into an amateur coaching career in the Denver, CO area, where he spent the majority of his business career. Surviving are two sisters, Jane Heydanek and her husband, Dennis, of Fort Mill, SC and Judith Karr and her husband, Thomas, of Fairview, TX; a brother-in-law, Joseph Goeke of Litchfield, IL, husband of the late Joyce Chalcraft Goeke who preceded Ken in death. Visiting with his extensive nationwide network of family, friends, extended family and business associates provided Ken with immense pleasure and satisfaction. A Memorial Service will be held at a later date in Ellery, IL prior to interment in Albion, IL. In lieu of flowers, memorials may be made to the American Diabetes Association, 2451 Crystal Drive, Suite 900, Arlington, VA 22202; or, Reach Out and Read, 1285 Franciscan Drive, Litchfield, IL 62056.

Mr. Kenneth G. Chalcraft, age 80, passed away peacefully in his sleep Thursday, March 7, 2019 at his residence, The Blake at Edgewater, in Indian Land, SC. He was born in Peoria, IL, January 3, 1939. Ken was the son of the late Harold G. Chalcraft... View Obituary & Service Information

The family of Mr. Kenneth G. Chalcraft created this Life Tributes page to make it easy to share your memories.

Mr. Kenneth G. Chalcraft, age 80, passed away peacefully in his...

Send flowers to the Chalcraft family.