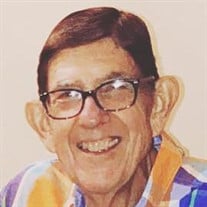 Mr. Kenneth C. Beam, Sr., of Fort Mill, SC passed away peacefully on October 27, 2017. The memorial service will be held at 2 p.m. on Tuesday, October 31st, 2017 at Unity Presbyterian Church in Fort Mill, SC. The family will receive friends following the service. Ken is survived by his wife of 55 years, Bobbie Oates Beam of Chester, whom he always referred to as “his bride”; his children, Anna Beam Pittman of Fort Mill and Kenneth “Bo” Beam, Jr. (Noelle) of Rock Hill; his five grandchildren, Lauren, Erika and Wynter Pittman, and Justin and Ryan Beam. He was preceded in death by his parents, John and Frances Beam and brother, Johnny Beam. Ken received his undergraduate degree from Belmont Abbey College, where he also taught. He received his master’s degree from Appalachian State University. He led a life dedicated to education as a teacher and administrator. Ken and Bobbie started their life together in Gastonia, NC where he began his teaching career. They later moved to Florence, SC where he was associated with the Florence District One School System. He moved to Fort Mill in 1981 to work as the Assistant Superintendent for Business for the Fort Mill School District. Following retirement in 1997, Ken began working for Springs Farm. Ken was the proud grandfather of five whom he loved and supported unconditionally. They love their “Big” tremendously and will miss his smile that lit up a room along with his sarcastic sense of humor. Ken lived a life of service to his community and friends. He was a charter member of the Fort Mill Rotary Club where he was a Paul Harris Fellow. Being very civic minded, it was a joy for him to serve on the Fort Mill Town Council. Ken and Bobbie were members of Saint Paul’s Episcopal Church where he served as clerk of the Vestry. As an avid outdoorsman, he enjoyed hunting trips with his buddies to Kansas and Georgia. Ken was a lifelong Clemson and diehard Panther fan. Memorials may be made to Saint Paul’s Episcopal Church, 501 Pine Street, Fort Mill, SC 29715.

The family of Ken Beam Sr. created this Life Tributes page to make it easy to share your memories.

Send flowers to the Beam family.