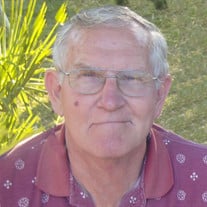 Jerry Allen Langford (age 79) of Indian Land, SC, passed away Wednesday, October 17, 2018 surrounded by loved ones. The family will receive friends from 11 a.m. until Noon on Saturday, October 27, 2018 at Wolfe Funeral Home. The memorial service will follow at Noon, with the Rev. Shannon Ford officiating. Burial will be held at a later date. Born in Hoschton, GA, Jerry was one of three sons of the late John and Averee Langford. He served in the U.S. Air Force as a fireman from 1958 to 1962. After his military service, he worked as a warehouse supervisor, for over 33 years, for Kraft/General Foods. He enjoyed fishing, watching the Andy Griffith Show, and just spending time at home with his family. Jerry was preceded in death by his beloved wife, Dorothy Reeves Langford, in January 2017. Surviving are his four daughters, Sharon “Tiger” Keel and her husband, Mark, of Charlotte, NC; Cheryl “Smokey” Morrison and her husband, Jamie, of Oak Island, NC; Shila “Cricket” Roach and her husband, Stan, of Fort Mill, SC; and Stacey Lewis and her husband, Brad “Bubba”, of Fort Mill, SC; seven grandchildren, Brittany, Cliffton, Tanner, Spencer, Tyler, Hunter, and Hayden; and two brothers, Harry (Ann), of Texas, and Gary (Brenda), of Georgia. Jerry attended the Adult Enrichment Center of Fort Mill where he was known as “Mr. Jerry”. Donations to this worthy cause may be made in Jerry’s name to the Adult Enrichment Center, 105 Lestina Court, Fort Mill, SC 29715.

The family of Jerry Allen Langford created this Life Tributes page to make it easy to share your memories.

Send flowers to the Langford family.