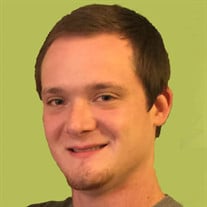 Mr. Jeremy Tanzell Graham, age 28, passed away Friday, May 31, 2019 at his home. The family will receive friends from 3 p.m. until 3:45 p.m. Wednesday, June 5, 2019, at St. John’s United Methodist Church. The memorial service will follow at 4 p.m. in the Sanctuary, with the Rev. Karen Radcliffe officiating. Son of Lewis A. Graham III and Deborah Massey, Jeremy was born in Charlotte. He attended Nation Ford High School and was currently working at Young’s Paint & Body Shop where he had found some good friends. Jeremy loved sports, especially the Carolina Panthers and South Carolina Gamecocks. In addition to his parents, Jeremy is survived by his stepmother, Phyllis Graham, his brother, John Michael “JJ” Morrison, Jr. and his wife, Jessica of Fort Mill; his nephews Elijah and Levi; and his maternal grandmother Ida E. Massey “Tootsie” of Fort Mill. Jeremy was preceded in death by his paternal grandparents L.A. and Tootie Graham and his maternal grandfather Jerry L. Massey. Jeremy’s goal in life was, in the words of Lynyrd Skynyrd’s classic song, to “be a simple man.” He was well on his way to achieving this goal when his time here was cut short by the demons and devil’s helpers who surrounded him and took him down. The family plans to do everything in their power to rid this community of the evil doers so no other victims will fall prey to this type degenerate influence. Memorials may be made to St. John’s United Methodist Church, 130 Tom Hall Street, Fort Mill, SC 29715 and to The Jimbo Melton Drug Court Assistance Fund, c/o Kevin Brackett, 1675 – 1A York Highway, York, SC 29745.

The family of Jeremy Tanzell Graham created this Life Tributes page to make it easy to share your memories.

Send flowers to the Graham family.