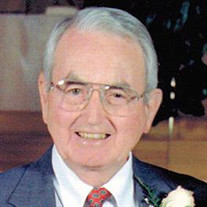 James Howard Navey, 93, died Wednesday, August 8, 2018, at Terrace Ridge Assisted Living. The family will receive friends from 6 to 8 Friday at Wolfe Funeral Home in Fort Mill, SC, and 1:00 to 1:45 P.M. before the service on Saturday. A graveside service with military honors will be 2 p.m. Saturday at Unity Cemetery in Fort Mill, with the Reverend Chris Hensley of Covenant Baptist Church in Gastonia officiating. Born in Shelby, NC, James was the son of Ernest and Pauline Bridges Navey. A graduate of Lattimore High School, he served in the U.S. Navy in World War II. After the war, he attended Gardner-Webb Junior College, where he met Sarah Farris. They married in 1948 and celebrated their 70th anniversary on June 13. Over the years, they lived in Shelby, Hendersonville, Charlotte, Fort Mill, and Gastonia. James was retired from the U.S. Postal Service in Charlotte. Active in civic affairs, he was past grand master of the Phalanx Masonic Lodge and past president of the Hornets Nest Civitan Club in Charlotte. In Fort Mill, he joined Catawba Masonic Lodge No. 56, where he was presented with the W.L. Broadwell Memorial Award in recognition of lifetime contributions to Masonry. He also served as president of the Lions Club in Fort Mill, where he was named a Melvin Jones Fellow for humanitarian services. In addition to his parents, he was preceded in death by three brothers, Ernest Eugene Navey, Donald Miller Navey and Paul Wilburn Navey. Surviving in addition to his wife are two daughters, Cathy Brooks (Troy) of Gastonia and Deborah Burriss (Andy) of Rock Hill, SC; his son, Jim R. Navey (Tori) of Fort Mill; five grandchildren, Sarah Brooks Sells (Sam) and Matthew Brooks (Leslie) of Gastonia, Drew Burriss (Rebecca) of Marietta, GA, James C. Navey of Fort Mill and Laura Navey of Providence, RI; and six great-grandchildren, Thomas and Madelyn Brooks, Jacob and Joshua Sells, and Jack and Emily Burriss; his sister, Patricia Navey Harrill of Shelby; his sisters-in-law, Bernice Navey of Stanley and Pat Reilly of Charlotte; and a number of nieces and nephews. The family extends thanks to Cristi Laye, the staff of Terrace Ridge, CaroMont Regional Medical Center and Gaston Hospice for their care. Memorials may be made to the Alzheimer’s Association, Masonic Home for Children (600 College Street, Oxford, NC 27565), or the charity of the donor’s choice. Condolences: www.wolfefuneralhome.com.

James Howard Navey, 93, died Wednesday, August 8, 2018, at Terrace Ridge Assisted Living. The family will receive friends from 6 to 8 Friday at Wolfe Funeral Home in Fort Mill, SC, and 1:00 to 1:45 P.M. before the service on Saturday. A graveside... View Obituary & Service Information

The family of James Howard Navey created this Life Tributes page to make it easy to share your memories.

Send flowers to the Navey family.