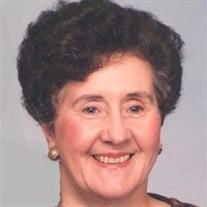 Mrs. Irene Merritt Allsopp, age 81 of Fort Mill, passed away Wednesday, December 4, 2019, at Atrium Pineville. The family will receive friends from 1 p.m. until 1:45 p.m., on Friday, December 13, 2019 at the First Baptist Church Fort Mill Chapel. The funeral service will follow at 2 p.m. The service will continue at Unity Cemetery. Born in Fort Mill, Mrs. Allsopp was the daughter of the late Jesse Furman Merritt, Sr. and Verla Yarborough Merritt. She was a life-time member of the First Baptist Church, where she sang in the choir, served in numerous areas including working with children and the youth and mission trips. Mrs. Allsopp also was a member of the W.M.U. and the Women’s Prayer Group and served the mothers of M.O.P.S. She graduated from Mars Hill University with a Liberal Arts Degree and also received a Business Degree from Kings College. Mrs. Allsopp worked in the Executive Offices of Springs Industries for 47 years, as a buyer and purchasing agent. Mrs. Allsopp enjoyed sewing, cooking and playing the piano. She loved music and her passion was performing with the Rock Hill and Fort Mill Community Theaters. Mrs. Allsopp was an avid reader and loved to read autobiographies and most of all her Bible. She was active in her community and served as treasurer of the Fort Mill Lions Club and president of the Lioness Club. She also served in the Fort Mill Chamber of Commerce. Mrs. Allsopp loved traveling, especially to the beach, fishing tournaments and old car shows with Danny. She was a supported wife and a loving mother. Surviving are her children, Richard Leroy Allsopp of Fort Mill and Janet (Brian) Brown, both of Fort Mill; her brother, Jesse Furman Merritt, Jr. and his wife, Gerrie Merritt; three grandchildren, Whitley, Virginia and Jacob; and three great-grandchildren, Austin, Daylin and Bella. She was preceded in death by her husband, Danny Allsopp (2010); her infant son, Danny Eugene Allsopp; and her brother, James Monroe “Jimmy” Merritt (2016). Memorials may be made to the First Baptist Church Building Fund, 121 Monroe White Street, Fort Mill, SC 29715.

The family of Irene Merritt Allsopp created this Life Tributes page to make it easy to share your memories.

Send flowers to the Allsopp family.