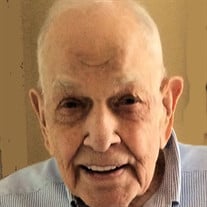 Hoyt Benjamin Howington, a World War II veteran and longtime certified public accountant, passed away Monday, August 20, 2018 at his home in Tega Cay, S.C. He was 96. Hoyt was born April 27, 1922, in Winder, Ga., the son of Zed Wilson Howington, a tenant farmer, and Jessie Patrick Howington, and grew up in North Carolina as one of 13 children. He attended both Gardner-Webb College and the University of Tennessee, graduating from the latter. Hoyt entered active duty in the U.S. Army in October 1945 and served in the European theater of World War II until being released from service three years later with an honorable discharge. During his time in the Army he attained the rank of corporal and was awarded the World War II Victory Medal and the Army of Occupation Medal. While serving in Germany he met the love of his life, Alina Maria Dachtera. The two were married in Berlin on September 1, 1948, and returned to the states later that year. They located in Charlotte, N.C., then moved to Tega Cay in 1978, building one of the first homes there. The couple enjoyed extensive travel during their long marriage. Hoyt initially worked as a CPA with a public accounting form and later became the controller for Byrum Seed Co. in Charlotte, where he worked for many years. He was quite active in the Lions Club, both in Charlotte and later in Tega Cay. He loved living in the Tega Cay community and had many friends there. He attended Lake Wylie Lutheran Church and greatly enjoyed the fellowship of its members. He also enjoyed fellowship with his many brothers, sisters, nephews and nieces at family reunions and was known among them for his geniality and sense of humor. In addition to his parents, Hoyt was preceded in death by two sisters, Erie Dell Worley and Una Morgan, and nine brothers, Herman Howington, Zed Howington Jr., William Howington, Hugh Howington, Hal Howington, Nolan Howington, Robert Howington, Horace Howington and Grady Howington. Hoyt is survived by his wife, Alina; his brother, Dwight Howington, of Gastonia, N.C.; and numerous nephews and nieces. The body will be cremated. A memorial service will be conducted at Lake Wylie Lutheran Church, Fort Mill, S.C., on Saturday, August 25 at 1 p.m., with a reception to follow. In lieu of flowers, expressions of sympathy may be made to Lake Wylie Lutheran Church, 2906 Hwy 160 West, Fort Mill, SC 29708.

The family of Hoyt Benjamin Howington created this Life Tributes page to make it easy to share your memories.

Send flowers to the Howington family.