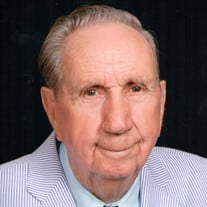 Mr. Glenn Crockett Potts, 96, died Wednesday, July 5, 2017, at Carolinas Medical Center in Charlotte. The funeral will be at 2 p.m. Sunday, July 9, 2017, at Pleasant Hill United Methodist Church, with the Rev. Joel McMakin officiating. Burial will be at the church cemetery. The family will receive friends following the service in the Fellowship Hall. Born in the Pleasant Valley Community of Indian Land, Mr. Potts was the last surviving of 13 children born to the late June Dallas Potts and Bessie Belle Patterson Potts. They were all raised at Pleasant Hill United Methodist Church. He graduated from Indian Land High School in 1940. In 1944, he married his wife, Sue Withers Potts, following Sunday services. They moved to Rock Hill in 1948 with their infant son, Eddie. They were founding members of Woodland U.M.C. in Rock Hill, where he sang in the choir, served on the Building Fund Committee and was Sunday School Superintendent. Mr. Potts worked for Belk Department Store in the Men’s Department; not only was he in sales, but he was a buyer and did all the measuring for things sent to alterations. He said, more than once, that he “had dressed all of Rock Hill’s finest businessmen.” He returned to Indian Land in 1989 building a house within a “stone’s throw” of where he was born. Mr. Potts was a longtime member of Pleasant Hill United Methodist where he attended Sunday School and senior’s group activities. With the love and dedication of many church members, Glenn was able to continue attending on a regular basis until just recently. Palm Sunday of this year was the first time he had missed church in quite a while; he was the oldest living, active member. Church was special to him and he as recently as two weeks ago, was adamant about getting back to going every Sunday. He enjoyed his family and friends and gardening. Surviving are his only child, Eddie Potts and his wife, Linda of Fort Mill. His caregiver, Pat Foote also survives as an “adopted child”; she called Mr. Glenn, her “adopted Daddy”. A true member of the family, Pat cared for Glenn’s wife, Sue, during her last years. She also cared for Glenn’s brother and sister and their spouses during times of illness. He was preceded in death by his beloved wife, Sue Withers Potts (2005). Memorials may be made to Pleasant Hill United Methodist Church Building Fund, 238 Fort Mill Hwy., Indian Land, SC 29707.

The family of Glenn Crockett Potts created this Life Tributes page to make it easy to share your memories.

Send flowers to the Potts family.