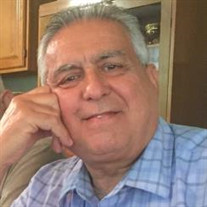 Mr. Giuseppe Eugenio Randazzo, known by many as Joe/Joseph, passed into the eternal life Sunday, March 26 2017 at CMC-Pineville after a 12-year battle with cancer. Joe is survived by his loving wife Barbara Jean (Bobbi) of 31 years and their seven children. Their four sons, Anthony, Albert, Andrew and Armando and three daughters, Adriana, Alesandra and Annalisa grieve the loss of their father but take great comfort that Dad no longer suffers and now has a place at the eternal table in heaven. Joe’s approach to his diagnosis in 2005 was unrelenting and resilient, just as his nature was. Although his vitality ended, his willpower and strength were present until his very last moment, with all of his family by his side. Born in Palermo Sicily, Italy, and raised in a town called Sciara, Joe was the son of the late Antonio Randazzo, known by many as Nonno, and surviving mother Giuseppa Scozzari Randazzo. In 1969, Joe’s family immigrated by boat and arrived in the states to begin their new lives. Starting their lives in the Bronx New York, the Randazzo family shared their passion for food by owning and operating their own restaurants. Joe was the oldest of five children. Surviving are his brothers, Philip of Monroe NC and Rosario of Matthews NC and his sisters, Mariella of Long Island NY, and Domenica of Red Bank NJ. Joe and his father had a bond that could not go unseen nor unnoticed. Their inseparable relationship was lead by their love for food, hard work, and most importantly, their family. Three weeks before the passing of his father, marked 45 years that they worked side by side in their restaurants. Just like his father, Joe never said no. There was nothing he wouldn’t do for his family, for his heart was so big. Many of his employees over the years remember his generosity and his kindness of spirit and reaped the benefit in having known him. Joe was an awesome man to everyone he met and knew. But perhaps no love could be compared to the love of his life, his wife Bobbi. He was her everything and all that knew them, knew of their inspiring and breathe taking love for one another. He lived for her company and love, as did she. Bobbi held him tight through all of the days he suffered and asked him to finally rest and rid of his pain. She said her goodbyes and Joe peacefully made his way to heaven; to stand by his father, best friend, and many other loved ones. Joe can never be forgotten and his wife assured him she would never let go, she will be there every step of the way, and where he goes, she goes. You will always be the love of my life. Love always and forever, the love of your life. Visitation was held at Saint Anne’s Roman Catholic Church in Rock Hill, SC on Wednesday, March 29 from 2 to 4 PM and also 6 to 8 PM. The Funeral Mass also was at Saint Anne’s in Rock Hill, SC on Thursday, March 30 2017 at 11 AM. Following the Mass, Joe was laid to rest alongside his cherished father, Antonio, at Forest Lawn Cemetery in Matthews, NC 28104. In lieu of flowers, the family asked that donations be made to St. Jude Children’s Research Hospital, Joe’s chosen charity.

Mr. Giuseppe Eugenio Randazzo, known by many as Joe/Joseph, passed into the eternal life Sunday, March 26 2017 at CMC-Pineville after a 12-year battle with cancer. Joe is survived by his loving wife Barbara Jean (Bobbi) of 31 years and their... View Obituary & Service Information

The family of Giuseppe Eugenio Randazzo created this Life Tributes page to make it easy to share your memories.

Mr. Giuseppe Eugenio Randazzo, known by many as Joe/Joseph, passed...

Send flowers to the Randazzo family.