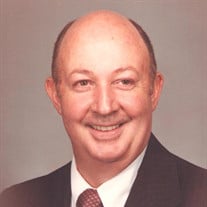 Franklin “Frank” Delano Terry, Sr. of Fort Mill went to be with the Lord on Thursday, January 12, 2017. Born June 21, 1936 Frank grew up in Pageland, S.C., the youngest of five children to the late Edward and Estelle Terry. He is survived by his loving wife of 60 years, Patricia “Pat” Terry. Many were greeted with a “Hey Bo” when they walked into Frank & Pat’s shop. They owned and operated Frank’s Auto Parts on Massey Street from 1985 until they retired in 2013. He will be remembered for the love of his great-grandchildren, a good meal and his sense of humor. Frank will be greatly missed and fondly remembered by Pat and their children, Beth Bailey (Pat) of Gilbert, SC and Del Terry (Becky) of Fort Mill; grandchildren, Jennifer Childers (Brent) of Rock Hill, Aaron Terry (Stefanee) of Fort Mill, Stephanie Hunt of Irmo, Jessica Stevens (Philip) of South Bend, Indiana and Melissa Fabian (TJ) of Summerville; his brothers, Robert Edward Terry (Ann) of Mooresville, N.C. and Billy Carlisle Terry (Sybil) of Spartanburg; and his sister, Betty Terry Houston of Winston-Salem, N.C. He also will be missed by his seven great-grandchildren. Family and friends will celebrate Frank’s life with a service at 3 p.m. on Saturday, January 14, 2017 at St. John’s Methodist Church in Fort Mill with a visitation following. Visitors are welcomed other times at the home of Del and Becky Terry at 1680 Crescent Ridge Drive, Fort Mill SC 29715. Donations can be made in Frank’s memory to the American Diabetes Association, PO Box 11454, Alexandria, VA 22312; or the Grand Lodge of Ancient Free Masons of South Carolina, P.O. Box 2185, Lexington, SC 29071-2185.

The family of Frank D. Terry Sr. created this Life Tributes page to make it easy to share your memories.

Franklin “Frank” Delano Terry, Sr. of Fort Mill went to be with...

Send flowers to the Terry family.