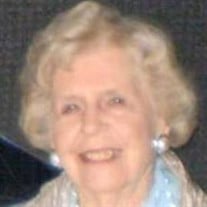 Fannie Belle Futrelle Ray, age 93, passed away peacefully on Monday, July 31, 2017, at the home of her daughter in Rock Hill, SC. A memorial service to celebrate her life will be held at 11 a.m. on Thursday, August 3rd, at Unity Presbyterian Church in Fort Mill, South Carolina with Dr. Dan Holloway and the Reverend Jeanie Bickett officiating. Born on May 2nd, 1924, in Emporia, Virginia, Fannie Belle was the daughter of Dr. Matt Person Futrelle and Lucille Hooper Futrelle. After graduating from Emporia High School in 1941, she attended Meredith College for two years before transferring to The University of North Carolina at Chapel Hill, earning a Bachelor of Arts degree in English. In 1946 she married the love of her life, Phillip Duckworth Ray, enjoying 71 years together until Phil's death in November, 2016. Fannie Belle and Phil moved to Raleigh as newlyweds where she worked as a high school English teacher and Phil finished his degree at NC State. She continued her love of teaching in Chester, SC, later retiring in order to take care of a growing family. Fannie Belle had a wonderful sense of humor and enjoyed spending time with family and friends, especially her older sister, Peggy Lou Nowell. Ninety-three years and they never had a fight between them! Her greatest joy though came from being "Teetsie" to her three grandchildren and five great-grandchildren. She was a friend who was a quick to laugh and smile, possessing both a sweet and helpful spirit. A card shark at heart, she loved playing bridge with her friends on Wednesdays and her monthly birthday group. A loyal Tar Heel fan, she was an avid supporter of both the football and the basketball teams, traveling all over the country to watch them play. In addition to her parents, Mrs. Ray was preceded in death by her husband, Phillip Duckworth Ray; brother, Matt Futrelle; brother and sister-in-law, Dean and Lou Futrelle; sister and brother-in-law, Susannah and Allen Gwyn; and brother in law, Gwynn Nowell . Fannie Belle leaves behind a family, whom she dearly loved, sister, Peggy Futrelle Nowell; daughter, Lucille Hooper Ray; son, Phillip (Flip) Duckworth Ray Jr (Jeanie); grandchildren, Margaret Ray Lowe (Bradley), Mary Watson Ray Mcghie (Te), Phillip Duckworth Ray III (Lesslie) ; great-grandchildren, Thomas Lowe, Caroline Lowe, Carter Smith, Harper Mcghie, and Flip Ray; plus a host of nieces and nephews. The family expresses a deep appreciation to Donna Bloodsaw and Tracy Foddrell, for their years of exceptional care and companionship. Appreciation also to HOSPICE & COMMUNITY CARE and all the staff at Homebridge. The family will receive friends at the home of Lucille Ray at 330 College Avenue in Rock Hill from 5:30 to 7:30 on Wednesday, August 2nd. In lieu of flowers, the family request memorials be made to the Unity Presbyterian Church (HISTORIC SANCTUARY), P.O. Box 1267, Fort Mill , South Carolina 29716; or to the charity of your choice.

Fannie Belle Futrelle Ray, age 93, passed away peacefully on Monday, July 31, 2017, at the home of her daughter in Rock Hill, SC. A memorial service to celebrate her life will be held at 11 a.m. on Thursday, August 3rd, at Unity Presbyterian... View Obituary & Service Information

The family of Fannie Futrelle Ray created this Life Tributes page to make it easy to share your memories.

Send flowers to the Ray family.