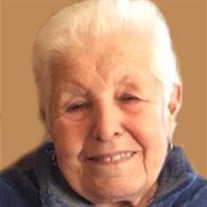 Mrs. Elvina Helen Radaelli Shoemaker, 89, of Tega Cay, died Wednesday, November 22, 2017 at the Wayne T. Patrick Hospice House in Rock Hill. The funeral service will be held Monday, December 18th at 2:00 pm at St. Philip Neri Catholic Church on Munn Rd., in Fort Mill, reception following at the church. Born in Paterson, New Jersey, Mrs. Shoemaker was the only child of the late Charles Radaelli and Elodia Helen Lozzi Radaelli. She graduated from Benedictine Academy and attended Caldwell College. She married Kenneth James Shoemaker in 1951 and worked as an accounting analyst for Shearman & Sterling Law Firm in New York City. She lived in Spring Hill, Florida from 1993 to 2012 and then moved to Tega Cay, S.C. to live with her daughter Paulette. Mrs. Shoemaker was a big fan of NASCAR, and especially of Denny Hamlin, driver of the #11 FedEx Toyota. She loved traveling, especially to National Parks and to Norway, and loved to tell stories of her adventures like skiing in Norway and crashing in a hot air balloon. She was quite the poker player and also enjoyed Mah Jong and Canasta which she taught to her whole neighborhood. A lifetime member of the Catholic faith, she was a member of St. Philip Neri Catholic Church the time of her passing. She was devoted to the Sacred Heart of Jesus and the Blessed Mother. Surviving are her daughters, Kathleen Donahue of Spring Hill, Fla. and Paulette Iadanza of Tega Cay, S.C.; her grandsons, Robert and Kenneth; and great-grandchildren, Hailey, Kenneth, Jr., Landon and Levi. She was preceded in death by her husband Kenneth in 1965.

The family of Elvina Radaelli Shoemaker created this Life Tributes page to make it easy to share your memories.

Send flowers to the Shoemaker family.