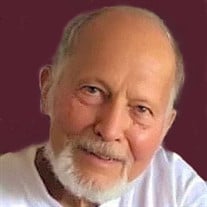 Dr. Edward F Pulver, age 85, passed away Friday, July 17, 2020, at Atrium Health Care in Pineville, N.C. The funeral service will be at 11 a.m., Wednesday, July 22, 2020 at St. Philip Neri Catholic Church. Born in Philadelphia, Pennsylvania, Edward was a son of the late Ferdinand Pulver and Josephine W. Pulver. Edward had a love of learning, and attained several degrees: first a Bachelor of Science degree from Muhlenberg College in Allentown, Pennsylvania, followed by Masters Degrees from Perdue, and the University of Pittsburgh and finally receiving his Doctorate in Physics from Penn State University. His love of learning followed him throughout his life; in fact, at the time of his passing, he was in the process of learning an entire new computer language. Edward taught at the West Virginia University, and later worked for Westinghouse for 39 years. While working for Westinghouse, he spent considerable time in Pittsburgh and later moving to the Carolinas. Despite all of his degrees, Edward remained a humble man that enjoyed the treasures of everyday life such as caring of his dogs, Star and Dixie, cheering for his beloved Steelers, and cooking with his wife. He also was an avid reader, nature lover, and a passionate birdwatcher. His enthusiasm for life will always be remembered by his family and friends. The world is truly a better place because of our beloved, Edward. Surviving are his wife of 29 years, Olga A. Pulver; his children, Karl Pulver and Andrea Drake; and three grandchildren, Anthony, Jason, and Cristina Drake. He was preceded in death by his sister, Elizabeth Pulver. Memorials may be made to the American Heart Association, 190 Knox Abbott Dr. – Suite 301, Cayce, SC 29033. The family will receive friends from 6 until 8 p.m., on Tuesday, July 21, 2020 at Wolfe Funeral Home.

The family of Edward F. Pulver created this Life Tributes page to make it easy to share your memories.

Send flowers to the Pulver family.