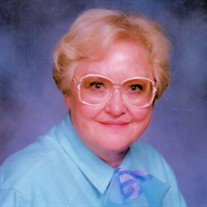 Mrs. Dorothy Monce Smith, age 88, passed away January 30, 2022, at the Wayne T. Patrick Hospice House in Rock Hill. Per Dorothy’s request, there will be no public funeral service at this time. Born in Middletown, Ohio, Dorothy was a daughter of the late Isaac Turpin Monce and Lula May Brown Monce. She retired from Tenneco where she worked as a CPA and Office Manager. During the last few years with the company, she traveled all over the United States to “troubleshoot” at various plants. Her faith in the Lord was immense. She played piano and organ in churches for over 70 years; she also volunteered her accounting skills to various churches during her lifetime. Dorothy prayed for people all the time. Part of this “ministry” included offering jars of apple butter from Pigeon Forge along with a prayer. She and her husband, David, moved to the Carolinas 20 years ago where they joined the Fort Mill Church of the Nazarene. She is survived by her husband of 69 years, David E. Smith; her sons, Randy Smith and his wife Becky of Liberty Township, Ohio, and Cameron Scott Smith of Fort Mill; her sister, Wilma Gallup of Nashville, Tenn.; her grandchildren, Joshua Smith (Candice), Jeremy Smith (Kelly), Jacob Smith, Rylee Britt (Bo) and Lillie Smith; great grandchildren, Zoe, Wesley, and Caleb Smith. Memorials may be made to God’s Bible School and College, 1810 Young Street, Cincinnati, OH 45202.

Mrs. Dorothy Monce Smith, age 88, passed away January 30, 2022, at the Wayne T. Patrick Hospice House in Rock Hill. Per Dorothy&#8217;s request, there will be no public funeral service at this time. Born in Middletown, Ohio, Dorothy was a... View Obituary & Service Information

The family of Dorothy Smith created this Life Tributes page to make it easy to share your memories.

Send flowers to the Smith family.