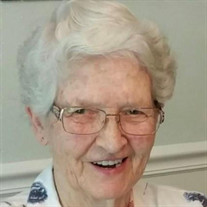 Dorothy “Dot” Elizabeth Mitchell Farmer, age 93, passed away Friday, May 6, 2022, at Atrium Health Care in Pineville, North Carolina. A Celebration of Life for Dot will be held at 11 a.m. on Tuesday, May 10th, 2022, at Tega Cay Baptist Church, with the Rev. Tim Vaughn officiating. Born and raised in Minnesota, Dot was a daughter of the late Howard Armitage Mitchell and Esther Elizabeth Poole Mitchell. Dot is survived by two daughters, Janel Brunson (Greg) of Fort Mill, SC and Lea Thorusen (Jerry) of Epping, NH; along with five grandchildren, Douglas, Jennifer, Laura, Brienne and Ashley; and twelve great-grandchildren. In addition to her parents, she was preceded in death by her husband, Raymond Farmer, both of her sisters and their husbands, Barbara (Vernis) Ziegelmann and Louise (George) Rodgers. Dot graduated from Roosevelt High School in Minneapolis, Minnesota in 1946 and the University of Minnesota with a degree in Physical Therapy (1950). After graduating from college, she worked as a Physical Therapist at a hospital for polio patients. In 1952, when Raymond returned from Korea, they got married and she became an Army wife, and a mother of two shortly thereafter. They had multiple moves throughout the United States and Europe. During those years she learned how to fly and flew for the 1960 U.S. Paratroop Team, and managed a small airport in Killeen, Texas while also being an instructor pilot. Dot also volunteered as an adult Girl Scout Leader and trained other leaders and also earned the highest adult award, The Thanks Badge. She also volunteered as a Red Cross Instructor, trained as a EMT and volunteer during search and rescue in the Shenandoah Valley Mountains in Virginia. Dot had a passion for the outdoors (skiing, hiking, camping, golfing), her cats, reading, puzzles, playing bridge, bowling, and Bible studies. She was an avid pistol shooter and was a N.C. Women’s Champion. After Raymond retired from the Army, they settled in Virginia and Dot retook her Physical Therapy Boards and worked as a Physical Therapist for 28 years. After Raymond died, she moved to South Carolina to be closer to family and resided here for the past 21 years. In her retirement years, she continued to play golf, ski, sing in the choir, play handbells, teach Sunday School, attend multiple Bible studies both at church and Bible Study Fellowship. She also loved road trips and visiting family and friends. Memorials may be made to Tega Cay Baptist Church Building Fund, 1875 Gold Hill Road, Fort Mill, SC 29708; or to the York County Humane Society, 8177 Regent Parkway, Fort Mill, SC 29715. Condolences: www.wolfefuneralhome.com.

The family of Dorothy "Dot" Mitchell Farmer created this Life Tributes page to make it easy to share your memories.

Send flowers to the Farmer family.