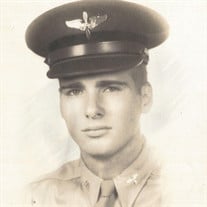 Donald Diegel Watt, Sr. died Thursday, August 2, 2018 at Wellmore Tega Cay. Born in Thomasville, Ga. on Dec. 21, 1924, he was the youngest son of William A. and Bob Lindsey Watt. Educated in the local schools, he entered the U. S. Army in Feb. 1943 and completed pilot training in August 1944. Mr. Watt trained at Charlotte, N.C., Florence and Columbia, S.C. Lt. Watt was in Hawaii when the war ended. Transferred to the Philippines, he was then moved to Japan for the Army of Occupation. After discharge in 1946, Mr. Watt attended Davidson College and Spartan School of Aeronautics. Recalled to active duty in Jan. 1949, Lt. Watt was stationed at Bergstrom AFB, Larson AFB and Phalsbourg AB, France. Capt. Watt resigned his commission in 1959 to accept appointment with the Presbyterian Church as a pilot/mechanic to the new Republic of Congo. In 1961 Mr. Watt married Lucretia. W. Stevenson of Camilla, Ga. who had served three years in the Congo as a medical technologist. They served together until 1964 when a communist rebellion broke out and Mrs. Watt and their daughter returned to the States and Mr. Watt followed in 1965. He then became a corporate pilot in Gastonia, N.C. and Newport News, Va. From 1977 until 1993, Mr. Watt worked as a mechanic and examiner at the Naval Air Rework Facility in Norfolk. After retirement, he rebuilt a 1942 Stearman biplane. Mr. Watt was preceded in death by a son, George L. Watt II; and his wife, Lucretia Stevenson Watt. He is survived by daughters, Frances W. Thomas of King George, Va., and Janet W. Steele of Fort Mill. S.C., a son, Donald D. Watt, Jr., of Newport News, Va.; a brother, Dr. F. Hansell Watt of Tallahassee, Fla, eight grandchildren; and three great-grandchildren. Memorials may be made to Mission Aviation Fellowship, P.O. Box 47, Wampa, ID 83653. A graveside funeral will be at held at the family plot in Laurel Hill Cemetery, Thomasville, Ga. at 2 p.m. on Sunday, August 5, 2018.

Donald Diegel Watt, Sr. died Thursday, August 2, 2018 at Wellmore Tega Cay. Born in Thomasville, Ga. on Dec. 21, 1924, he was the youngest son of William A. and Bob Lindsey Watt. Educated in the local schools, he entered the U. S. Army in Feb.... View Obituary & Service Information

The family of Donald Diegel Watt Sr. created this Life Tributes page to make it easy to share your memories.

Send flowers to the Watt family.