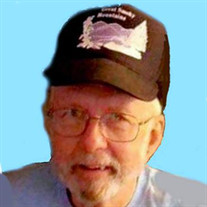 Donald Pinney, age 78, passed away Tuesday, April 2, 2019, at Atrium Health in Pineville, N.C. The family will receive friends from 2:00 p.m. until 2:45 p.m. on Friday, April 5, 2019 at St. John’s United Methodist Church in the Fellowship Hall. The memorial service will follow in the sanctuary at 3:00 p.m., with the Rev. Karen Radcliffe officiating. Born in Deposit, New York, Donald was a son of the late John and Emily Pinney. He graduated from Deposit High School. Donald had a lifelong love of photography creating his own darkroom in his home as a teenager. He went on to serve his country in the U.S. Navy during the Cuban Missile Crisis. His assignment: taking long-range photos of Cuba from helicopters. After returning home, he worked with G.A.F. in Binghamton, New York. He moved to the Carolinas in 1977 to work with Colorcraft and Qualex in Charlotte, N.C. He and his wife, Sharon loved to travel and drove all over the United States, including Alaska. Their travels were a family affair, often including the children grandchildren. Don’s career shifted after technology changed and he worked for Black and Decker for 16 years before retiring. Surviving are his wife of 37 years, Sharon Ladell Curry Pinney; his children, Louis (Linda) Arnold, Laurie (Bob) Waldorf, Brian (Jamie) Arnold, Tammy Arnold, Eric Pinney and William Miller (Phacharin); his grandchildren Cory Stasko, Wade Dean, Malissa Dean, Cassie Stasko, Patch Miller, Brianna Arnold; his great-granddaughter, Layla Houck; and his brother, Mark Pinney. In lieu of flowers memorials may be made to the St. John’s United Methodist Church, P.O. Box 1298, Fort Mill, SC 29716. Condolences: www.wolfefuneralhome.com.

The family of Donald Roger Pinney created this Life Tributes page to make it easy to share your memories.

Send flowers to the Pinney family.