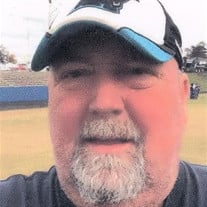 DeWayne “Mack” McDonald, 57, died Friday, June 15, 2018, at CMC-Waxhaw. The family will receive friends from 10 a.m. until 10:50 a.m., Tuesday, June 19, 2018, at Belair United Methodist Church and also following the committal service in the Family Life Center. The funeral will follow at 11 a.m., with the Rev. Mallory Forte officiating. Burial will be at the church cemetery. Mack was born in Byesville, Ohio but considered himself to be an “Indian Lander” since he moved there when he was 9 years old. He was a 1979 graduate of Indian Land High School. Mack was retired from the City of Lancaster as Public Utilities Director and was a member of Belair United Methodist Church. He was a member and past president of the S.C. Rural Water Association and also was a proud member of the Golden Shovel. Mack was a gun enthusiast and enjoyed shooting clays, collecting coins and listening to country music. He was a pillar of the Indian Land community and never met a stranger. Surviving are his loving daughter, Allison McDonald Cutrone (John) of Rock Hill; mother, Peggy McDonald; brother, Harold Jack McDonald, Jr. of Indian Land; sister, Cassie McDonald Stump (Randy) of Indian Land; and his ex-wife, Ruby McDonald. He was preceded in death by his father, Harold Jack McDonald, Sr. (2011). Memorials may be made to Belair United Methodist Church, 8095 Shelley Mullis Road, Indian Land, SC 29707; or to the National Kidney Foundation, 500 Taylor St. – Suite 101, Columbia, SC 29201.

The family of DeWayne "Mack" McDonald created this Life Tributes page to make it easy to share your memories.

Send flowers to the McDonald family.