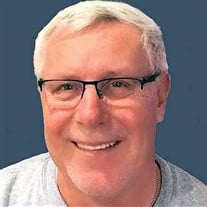 Mr. Daniel Alexander Wloch, age 72, of Indian Land, passed away Monday, December 23, 2019. The family will receive friends from 6 p.m. until 7:15 p.m., on Thursday, December 26, 2019 at Wolfe Funeral Home. The funeral service will follow at 7:30 p.m., with Chaplain Vernon Thornhill. Born in Chicago, Daniel was a son of the late Peter I. Wloch and Anna Jackaki Wloch. He proudly served in the U.S. Navy during the Vietnam War. Daniel graduated from Elmhurst College in Elmhurst, IL and was a systems manager for ATT for 27 years and after retirement he worked for Caribou Coffee in Schaumburg, IL for 10 years. He enjoyed both vegetable and flower gardening Surviving are his wife of 51 years, Elaine P. (O’Shea) Wloch; his son, Daniel A. “Danny” Wloch, Jr. of Phoenix, AZ; his daughters, Janis Keppler (Jeremy) of Cape Coral, FL and Katie Brenner (Patrick) of Indian Land, SC; his brothers, Andrew “Andy” Wloch (Barbara) of Lyons, IL; his sister, Constance “Connie” Slavick (Jim) of Simpsonville, SC; two grandchildren who were his pride and joy, Nolan and Morgan; and many nieces and nephews. In addition to his parents, he was preceded in death by a brother, Stanley Wloch. Memorials may be made to the Humane Society of York Co., 8177 Regent Parkway, Fort Mill, SC 29715.

The family of Daniel Wloch created this Life Tributes page to make it easy to share your memories.

Send flowers to the Wloch family.