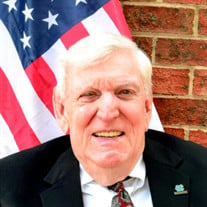 Dr. Curtiss W. Daughtry of Rock Hill, SC passed away August 2, 2020. He was born in Smithfield, NC on March 4, 1935 to Mallie Carr and Bessie Grant Daughtry. Growing up in very humble beginnings, he went on to graduate with honors from Smithfield High School, lettering in football, basketball and baseball. He made All-State in basketball his senior year. Following high school, Dr. Daughtry attended the University of North Carolina Chapel Hill. While at UNC, he was Chairman of the Editorial Board, Vice President of the YM-YWCA, President of Sigma Phi Epsilon and Chairman of the Campus Chest. In his senior year, he was elected to the “Order of the Old Well”, an honorary society which recognizes scholarship and leadership. He received his BS degree from the University in 1957. After earning his undergraduate degree, Dr. Daughtry was accepted to the UNC School of Dentistry. He was commissioned into the Dental Corps of the US Naval Reserve his freshman year. He received his DDS degree in 1961. Immediately upon graduating from dental school, Dr. Daughtry entered active duty with the U.S. Navy. He served his entire military career with the U.S. Marine Corps, achieving the rank of Lieutenant Commander. After completion of his military obligation, Dr. Daughtry entered the private practice of dentistry in Roanoke Rapids, NC while awaiting his orthodontic residency program. While in his primary residency, he attended mini residencies at Harvard and John Hopkins. He received his M.Sc.O. Degree from UNC in 1967. With orthodontic credentials in hand, Dr. Daughtry opened a private practice in Florence, SC. He later opened offices in Marion, Myrtle Beach and Columbia spending equal amounts of time in each office. He was a member of the S.C. Dental Association and the American Dental Association where he served on or chaired multiple committees. He was Vice-Chairman of Stonemark Corporation, the for-profit arm of the Association. He was a member of the Florence Dental Society and President of the S.C. Orthodontic Association where he served on the Board of Directors and chaired numerous committees. As a member of the American Association of Orthodontics, he served on the Council of Communications and Council on Orthodontic Healthcare. Dr. Daughtry was a founding member for the SC Recovering Professional Program and served on its Advisory Board. He chaired the Dentist Advocacy Committee for the SC Dental Association. In his well over 50 years in the professions, Dr. Daughtry never once considered retirement. He stated many times that he could not find anything that gave him the joy and satisfaction of practicing his beloved orthodontics. He truly loved his relationship with his patients. He attributed his longevity to his excellent staff. Dr. Daughtry served on the Florence Regional Airport Commission for eight years. He was Chairman for two years. In addition, he was Chairman of the Florence Air and Missile Museum Development Cooperation. In addition to his parents, Dr. Daughtry was predeceased by his sisters, Thelma Richardson, Laney McAtee, Hazel Linenbrogger; and his brother, Charles Daughtry. Dr. Daughtry is survived by his sons, C. Wilson Daughtry, Jr. (Susan) of Fort Mill, SC, David Grant Daughtry of Longwood, FL and Emery Carr Daughtry of Charlotte, NC; his grandchildren, Curtiss W. Daughtry III (Shannon) of Greenville, SC, George Logan Daughtry (Anna) of Charlotte, NC; and his greatgrandchildren, Hank Logan Daughtry and Vera Rose Daughtry. The funeral service will be on August 4th at 3 PM in the chapel of Wolfe Funeral Home in Fort Mill. SC. Rev. Steve Polk of First Baptist Church, Rock Hill will officiate the service. A visitation with the family will be held following the service. In lieu of flowers, please consider supporting the National Children’s Oral Health Foundation (NCOHF) https://www.americastoothfairy.org/.

Dr. Curtiss W. Daughtry of Rock Hill, SC passed away August 2, 2020. He was born in Smithfield, NC on March 4, 1935 to Mallie Carr and Bessie Grant Daughtry. Growing up in very humble beginnings, he went on to graduate with honors from Smithfield... View Obituary & Service Information

The family of Dr. Curtiss Wilson Daughtry created this Life Tributes page to make it easy to share your memories.

Send flowers to the Daughtry family.