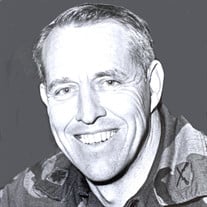 Colonel (Ret.) Charles David Stephens, age 81, passed away Monday, February 14, 2022, at his home in Fort Mill, South Carolina. Born in Caledonia, Mississippi, David was the son of the late Lamar and Foresteen Adams. He graduated from Murphy High School in Mobile, Alabama, received his bachelor’s degree from University of Houston in 1963 and was then commissioned as an Infantry officer in the United States Army. He later attended Central Michigan University where he achieved his master’s degree in business administration. David served as an active-duty officer in the United States Army for 26 years. He served two one-year tours in Vietnam (1966, 1970). During his first tour, he was an American advisor and always remembered the beauty of the country and the kindness of the Vietnamese. During his second tour, he served as an Infantry Company Commander and as a Calvary Troop Commander and was awarded the Combat Infantry Badge (CIB) and five separate Bronze Stars, two with valor. After Vietnam, he served in a variety of posts, including Ft. Ord, California, Ft. Sam Houston, Texas, and as a Battalion Commander, in Friedberg, Germany. David completed his military career in various positions at the Pentagon, including the Army Staff and the Joint Chiefs of Staff. He retired from active duty in 1989 and was awarded the Defense Superior Service Medal (DSSM) for superior meritorious service on the Joint Chiefs of Staff. David’s second career was spent working for the Public Broadcasting System (PBS), specializing in adult education in what would eventually become on-line learning. David continued to serve his community as an election worker for over 15 years in Burke, Virginia, until he moved to the Carolinas in 2005. He also held various positions in his homeowner’s association and church. In retirement David enjoyed traveling and studying the word of God, including multiple trips to Israel and the ancient Holy Lands. An avid sportsman, David enjoyed duck hunting, fishing, and skiing with family and friends, and watching and following his favorite teams. He also loved cheering on his grandchildren on the sidelines of their activities, walking his cherished dogs Ruby and Sherman, and playing golf regularly with neighbors. A lifelong runner, he completed ten marathons. Humble and honorable, David will be remembered by his lifelong battalion motto of “Deeds, Not Words”. It was appropriate that his last duty station was at Carolina Orchards’ “F Troop.” He is survived by his wife of 25 years, Patricia Anne Stephens, his children, Jennifer (William), Cathleen (Adam), Elizabeth (Gavin), Barbara (Aaron); his grandchildren John, David, and Emily (Jennifer), Katherine, Colin, Ian, and William (Elizabeth), Braydan and Lennon (Cathleen), Isabella and Alexander (Barbara); his godchildren Aimee (Sikes) Keller and James David Sikes; his siblings Terry Adams (Toni) and Debra Ross (Danny); and his sister-in-law Pamela Royce (Dennis). He is predeceased by his first wife of 30 years, Judy Royce Stephens, who passed in 1995. In lieu of flowers, the family prefers donations to be made in honor of C. David Stephens to Jill’s House at 9011 Leesburg Pike, Vienna, VA 22182 or jillshouse.org. He will be interred at Arlington National Cemetery at a later date.

The family of Colonel (Ret.) David Stephens created this Life Tributes page to make it easy to share your memories.

Send flowers to the Stephens family.