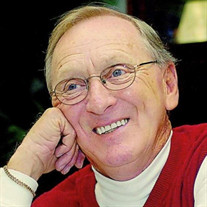 You can view Charlie's private funeral at 2 p.m. by clicking on this link: https://youtu.be/DvWo25bYHWA Former Mayor Charles “Charlie” Powers, 81, husband of Peggy Gibson Powers, died Thursday, March 11, 2021. Born in Great Falls on November 6, 1939, Charles was a son of the late Steve and Ruth Powers. Charles married the love of his life, Peggy Gibson Powers, in 1956. Prior to his political career serving Fort Mill and York County, he worked at Everlock and PPM. His political services spanned more than three decades. He believed in serving Fort Mill in the political arena and was elected to Fort Mill City Council for three 2-year terms 1976-1982. Charles was elected for mayor in 1983, where he served as mayor for twenty-four years. A humble leader, Charles was recognized for his significant community and civic involvement with numerous awards, including Jaycee of the Year (1967), Fort Mill Chamber of Commerce Citizen of the Year (1981), Fort Mill Lion of the Year (1982), Governor David Beasley's Order of the Palmetto Award (1996), I-77 Interchange Designation (2004) and Golden Eagle Award (2014). Charlie, as he was affectionately known, was treasured by his neighbors, friends, and family, in whom he instilled the importance of service and selfless devotion to the surrounding communities. He was a long-time member of St. John’s United Methodist Church. Charles was a very active board member and huge supporter of The Sheriff’s Foundation of York County and a past member of the Moose Lodge of Fort Mill. He is survived by Peggy Gibson Powers. In addition, he is survived by his children, Charles William Powers (Kathy), Teresa Powers McCall (Roger); and grandchildren, Blair Powers Haag (Randy), Megan Alyssa Powers (Bryan), Austin Banks McCall (Emily) and Abby Powers McCall. A graveside service will be held, Monday, March 15, 2021, at 3:15 p.m., at Unity Cemetery. The family will receive friends at The White Homestead, Sunday, March 14, 2021 from 2 p.m. to 4 p.m. Due to COVID-19, please wear a mask and practice social distancing. In lieu of flowers, memorials may be made to The Sheriff’s Foundation of York County, 1675-2A York Highway, York, South Carolina 29745, Attention Jessica Keith; or St. John’s United Methodist Church, 130 Tom Hall Street, Fort Mill, South Carolina 29715.

The family of Charles E. Powers created this Life Tributes page to make it easy to share your memories.

Send flowers to the Powers family.