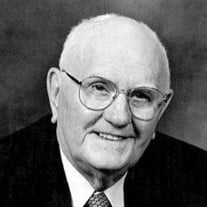 Charles Richard Boyette, Sr. "Charlie" of Fort Mill passed away on August 8th, 2020, at the McWhorter House in Monroe, NC. He was 97 years old. Born on September 23rd, 1922, Charlie was the son of Charles Gaston Boyette and Sarah Emma Bartlette Boyette of Goldsboro, North Carolina. He graduated from the NC State College of Agriculture and Engineering with a Bachelor of Science in Textile Manufacturing. He moved his family to Fort Mill and worked with Springs Industries for the next 35 years. Charlie was a member of Saint Paul’s Episcopal Church. Charlie proudly served his country during WWII in the Army's 87th Chemical Mortar Battalion from 1943 1945. He fought in five battles of the European Campaign including: the Battle of Normandy, the Battle of Ardennes, the Battle of Rhineland, and the Battle of Central Europe. For his service, Charlie was awarded the Distinguished Service Cross, European-African-Middle Eastern Campaign Medal, Army Good Conduct Medal, and The Purple Heart. Charlie was a Master Mason and Noble Shriner. He earned his Lifetime Membership with the Indian Land Lodge # 414 and the York County Crescent Shrine Club. Some of his favorite memories were helping children into the Shriners Children's Hospital. Charlie served on the Fort Mill City Council for 24 years and 20 years as an official starter for the Leroy Springs Aquatic Club. His hobbies included restoring, buying and trading guns, and a good gun show. He enjoyed bird hunting at the Bramblebush Hunt Club, fishing, tennis, and softball. Charlie is survived by his daughter Sara Jo Boyette McKinney and her husband Charles of Fort Mill; his son, Charles Richard Boyette, Jr. and his wife Shirley of Orange Park, Florida; two grandchildren, Sara Allison McKinney Hendrix and her husband Matt of Lexington, South Carolina; Matthew Bradley Boyette and his wife Rebecca of Jacksonville, Florida; and, two great-grandchildren, Miles Jacob Hendrix and Caroline Ray Hendrix. Charlie was preceded in death by his parents, Charles and Emma Boyette; brothers, Ernest Milton Boyette and Charles Aaron Boyette; and, his grandson, Benjamin Reid McKinney. A graveside memorial service will be held at 12 p.m. on Friday, October 23rd at the Unity Cemetery. In lieu of flowers, memorial donations may be given to The Shriners Hospitals for Children – Greenville, Office of Development, 950 West Faris Road, Greenville, SC 29605-4277. To Plant Memorial Trees in memory, please visit our Sympathy Store.

The family of Charles Boyette created this Life Tributes page to make it easy to share your memories.

Send flowers to the Boyette family.