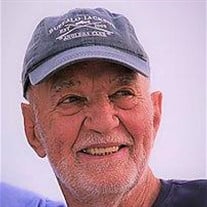 Passed peacefully September 18, 2018, G. Brady Buckley Jr. Brady was born in Parkersburg, West Virginia on August 16, 1930. He spent his formative years in Longmeadow, MA. Brady continued his post-secondary education in Worcester, MA and graduated from Worcester Polytechnical Institute (WPI) with a degree in Mechanical Engineering. He was married on April 24, 1954, to Ann (Harper) in Springfield, MA. Brady and Ann had an exciting, adventuresome marriage that was filled with love. Together, they raised their four children. Brady went on to have a successful career in both corporate business and as an entrepreneur that allowed him and his family to experience life in many states across the country. They approached each move as an adventure and an opportunity to learn. Brady was an avid sportsman from a young age, and that enjoyment carried him through his entire life. He played lacrosse in college, proudly wearing the WPI jersey. In summer, he enjoyed sailing. In winter, he was a skilled skier and was also a member of the Ski Patrol for Peak and Peak (Clymer, NY) and Pine Knob (Village of Clarkston, MI) Following retirement, Brady and Ann moved to Tucson, Arizona but they certainly did not slow down. Brady continued to be active, setting a goal to climb each of the mountains around the city. At the age of 70, he achieved that goal, climbing Catalina Ridge, Mt. Lemon, Table Mountain, Finger Rock, Mt. Kimball, Cathedral Rock, and Romero Canyon. One of his favorite things to do was to take his grandchildren on his "Pop-Pop" walks. He shared not only his knowledge but his insatiable curiosity for life. Through his own example, he showed them how a curious nature can unlock worlds of opportunity, through experience and relationships. And, unlike many adults, Brady did not lose that sense of wonder and continued to explore and seek a better understanding of the world. Brady was also a masterful woodworker and made beautiful cherry furniture for his children and grandchildren. Brady had deep love and appreciation for nature. He found true happiness in the woods, listening to the birds, and often said that he felt God's presence there, saying, "This is my church." That love led him, with Ann by his side, to become a docent at the Arizona-Sonora Desert Museum. He always said that his work as a docent gave him so much joy, combining his love of nature and learning. Survived by: Wife, Ann Buckley Daughter, Leigh Kleinert Daughter, Elizabeth Randall (Doug) Son, Brady (Kelly) Son, David (Stephanie) Grandchildren: Kate Kleinert Eric Kleinert Sarah Randall Brendan Bishop Matthew Buckley Jack Buckley He also leaves to mourn a wide circle of friends and family. Service to be held in Sandwich, MA at a date yet to be determined. Arrangements made by Wolfe Funeral Home, Fort Mill, SC. The family would like to thank the staff at The Blake for their support and kindness, as well as the Hospice staff who provided compassionate care in his final days. That man is a success who has lived well, laughed often and loved much; who has gained the respect of intelligent men and the love of children; who has filled his niche and accomplished his task; who leaves the world better than he found it; who has never lacked appreciation of earth's beauty or failed to express it.; who looked for the best in others and gave the best he had. ~Author Unknown~

The family of Brady Buckley Jr. created this Life Tributes page to make it easy to share your memories.

Send flowers to the Buckley family.