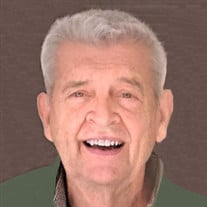 Mr. Robert “Bob” Joseph Nastase, age 86, passed away Sunday, March 13, 2022, at Novant Presbyterian Hospital in Charlotte, NC. Visitation will be from 4 p.m. until 6 p.m. on Tuesday, March 22, 2022, at Wolfe Funeral Home in Fort Mill, SC There will be a Rosary Service at the conclusion of visitation. The Funeral Mass will be at Noon, on Wednesday, March 23, 2022 at Our Lady of Grace Catholic Church where Bob and his wife were charter members. Father Jeffrey Kirby will officiate. Burial will follow at Crown Memorial Park in Pineville, NC. Born in Beaverdale, PA, Bob was the only child of Joseph Robert Nastase and Madeline Donnelly Nastase. A graduate of Penn State, Bob spent his career in education and coaching. He was a teacher and basketball coach for the Lakewood High School in Lakewood, NJ. Under his leadership, Lakewood High School won two state championships in 1967 and in 1975. Also in 1975, the team was recognized as the #1 team in the United States. He later coached at Toms River School System in Toms River, NJ. There, he won three consecutive conference titles 1996, 1997, and 1998. He took the team to the Shore Conference Tournament Championship, which is the only time they’ve ever competed there. Bob and his wife relocated to the Carolinas in 1978. In Charlotte, he coached basketball at UNCC from 1978-1982. In 1982, he began coaching at Myers Park High School where he won several conference championships and made it to the state semi-finals one year as well. He also coached at Oral Roberts University. He was a teacher, mentor and coach to many young men who went on to college and professional sports as well as other successful careers. He is survived by his wife of 61 years, Mary Agnes “Aggie” Hautz Nastase of Indian Land, SC and their children: Robert Todd “Robby” Nastase and his wife, Jana, of Clover, SC, Jill Louise Arko and her husband, Frederick, of Charlotte, NC, Jay Edward Nastase and his wife, Pamela, of Charlotte, N.C., Jodi Ann Grice and her husband, Richard “Ricky”, of Stanfield, NC, and Cara Rene Fernandez and her husband, Albert, of Indian Land, SC; and grandchildren, Robert Markus Nastase, Seth Ryan Grice, Zachary Thomas Grice, Scout Montgomery Grice, Isabella Grace Fernandez and Nathan James Fernandez. Memorials may be made to the St. Jude Children’s Research Hospital, 501 St. Jude Place, Memphis, TN 38105-9959

The family of Bob Nastase created this Life Tributes page to make it easy to share your memories.

Send flowers to the Nastase family.