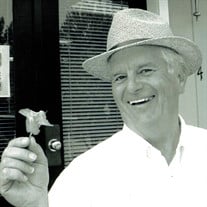 Mr. William Harris “Billy” Barron, Sr., age 84, died Saturday, January 23, 2021, at the Wayne T. Patrick Hospice House in Rock Hill. These are the links for those who would like to join the virtual service for Billy Barron on Tuesday, January 26th at 11 am. Church website: https://unityfortmill.org/about-us/live/ YouTube: https://www.youtube.com/channel/UCwlDAwO7r_O7DgJVmbh4N7g Facebook: https://www.facebook.com/UnityFortMill. Billy will be buried in the Barron family plot which was once a part of the home place. He said, “I was born on this property and now buried on this property; I never got far in life.” Born in the family home place on Tom Hall Street in Fort Mill, Billy was a son of the late Walter Taylor Barron, Sr. and Olive Harris Barron. He attended the Citadel and also the University of South Carolina. Billy proudly served in the U.S. Army. He was the owner of Barron Insurance Agency and also was a realtor; but he greatly loved being a ranger at the Anne Springs Close Greenway. Billy was a lifelong member of Unity Presbyterian Church, where he served as a deacon and Sunday school teacher. He was instrumental in having a reproduction of the Grist Mill, the mill for which Fort Mill was named, built on the original site on Steele Creek. Hunting and fishing were a big part of his life. Billy was blessed with a wonderful family and great friends. Surviving are his wife of 61 years, Patricia “Patty” McClary Barron; his son, William “Bo” Barron, Jr. of Georgetown; two daughters, Vereen Barron Brown (Mike) of Fort Mill and Mary Virginia “Gin” Barron of Hailey, Idaho; five grandchildren, Joni Howell (Brett), Ashley Baker (Michael), Hailey Davis (Van), Taylor Johnson (Robert) and Ken Brown (Alyssa); his eight great-grandchildren, Zoey, Penny and Michael Baker, Ruby Howell, Mary Hoke and Hattie Johnson, and Bo and Wells Brown; and his caretaker, Nikki Meeks. In addition to his parents, Billy was preceded in death by his sister, Mary Barron Baumgardner and brother, Walter Taylor Barron, Jr. Memorials may be made to Unity Presbyterian Church, P.O. Box 1267, Fort Mill, SC 29716.

Mr. William Harris &#8220;Billy&#8221; Barron, Sr., age 84, died Saturday, January 23, 2021, at the Wayne T. Patrick Hospice House in Rock Hill. These are the links for those who would like to join the virtual service for Billy Barron on Tuesday,... View Obituary & Service Information

The family of Billy Barron created this Life Tributes page to make it easy to share your memories.

Send flowers to the Barron family.