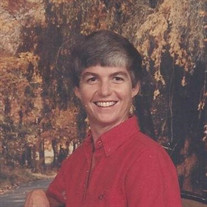 Ms. Barbara Louise Yarborough stepped into the arms of her Master on Saturday, June 1, 2019 while at home. The memorial service will be at 2 P.M. on Friday, June 7 at Pleasant Hill UMC in Indian Land, SC. The Rev. Joel McMakin and the Rev. Gary Baldwin will officiate. The family will host a reception after the service. Barbara was born in Indian Land, SC to David Olin and Mattie Louise Williams Yarborough. Nicknamed “Termite” because of her short stature, Barbara graduated from Indian Land High School where she excelled in basketball and various other sports, being voted “Most Athletic” her senior year. She was also voted “Most Mischievous” due to her prankish personality. An outstanding member of her class, she was the recipient of many other awards. Growing up, Barbara was a member of Pleasant Hill UMC and was very active in the Youth Group, Bible studies, church camp and conference seminars. She surrendered her life to Christ at a very young age while watching a Billy Graham Crusade and she served her Lord and Savior faithfully for the rest of her life. Barbara received her BS degree in Physical Education from Winthrop University. After graduation she taught physical education in the Charlotte Mecklenburg School system for several years and was one of the few nationwide who were selected to attend the National Institute On Girls Sports at Michigan State University. She earned her MA in Physical Education from UNC Chapel Hill and taught Physical Education at UNC and later at Elon College. During this period, she opened a successful gymnastics studio in Burlington, NC and was an independent sales representative for various companies. While in Elon, Barbara was ordained as a Diaconal Minister of children’s education in her local Church. Several years later, she stepped down as Diaconal Minister, because Christ had called her to serve the Kingdom in a different manner. She moved to Raleigh, NC, and opened Restoration Ministries in her home where she poured into the lives of those suffering from various substance addictions and abuse. Ever the entrepreneur, Barbara also started her own successful lawn care service Barbara was a woman who “walked the talk”. Her love for Jesus permeated every aspect of her live. She deeply loved her family and friends and they loved her. She will be greatly missed. Even while suffering from Alzheimer’s over the last several years, she fought the good fight and finished her race. The family would like to extend their sincere gratitude to Providence Care Hospice, Bright Star Home Care, Harbor Chase, Carolina Gardens and Autumn Leaves for their loving and compassionate care of Barbara these last few years. Barbara is survived by her brother Jerry Yarborough (Margie) of Jacksonville, FL; her sister Muriel Abercrombie (Gray) of Fort Mill, SC; her five nephews Lynn Yarborough (Debbie) of Fernandina Beach, FL; Bryan Yarborough (Dinah) of Tampa, FL; David Yarborough (Lisa) of Lafayette, LA; LtCol. Saddler Taylor of Irmo, SC; CPO Benjamin Abercrombie (Elizabeth) of Chesapeake, VA and 18 great nephews and nieces. In lieu of flowers the family desires that memorial contributions be made to the Wounded Warriors Project, P.O. Box 758517, Topeka, Kansas 66675 or to the Alzheimer’s Association, SC Chapter, 3223 Sunset Blvd., West Columbia, SC 29169.

Ms. Barbara Louise Yarborough stepped into the arms of her Master on Saturday, June 1, 2019 while at home. The memorial service will be at 2 P.M. on Friday, June 7 at Pleasant Hill UMC in Indian Land, SC. The Rev. Joel McMakin and the Rev.... View Obituary & Service Information

The family of Ms. Barbara Louise Yarborough created this Life Tributes page to make it easy to share your memories.

Ms. Barbara Louise Yarborough stepped into the arms of her Master...

Send flowers to the Yarborough family.